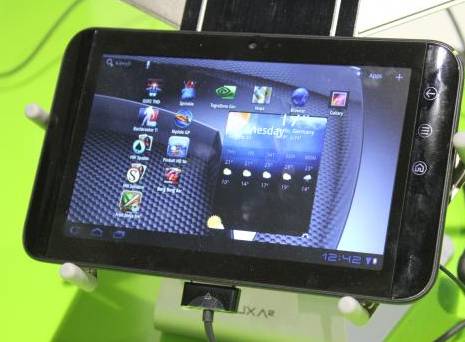 When the Dell Streak 7 launched earlier this year it was the first 7 inch tablet to feature a 1 GHz NVIDIA Tegra 2 dual core processor. But the tablet had two strikes against it: It shipped with a low resolution, 800 x 480 pixel display and with Google Android 2.2 Froyo at a time when most tablets had higher resolution screens and Android 3.x Honeycomb software.

Now Dell is getting ready to remedy at least one of those problems with a software update that brings Android 3.2 Honeycomb to the 7 inch tablet. Sascha from Netbook News got an early look at the updated tablet software at the IFA trade show in Berlin today.

Dell has gone with a standard Honeycomb user interface with a combination of widgets and app icons on the home screen an software buttons in a bar on the bottom of the device for Home, Back, and Recent Apps functions. This replaces the Dell Stage software overlay that had been running on top of earlier tablets from Dell including the Dell Streak and Dell Streak 7 running Android 2.2.

This isn’t really the first time we’ve seen Honeycomb on Dell’s 7 inch tablet. Earlier this summer Android hacker DJ Steve created custom software for the tablet using Android 3.2 But it is the first look at the official software update from Dell.

6 replies on “First look at the Dell Streak 7 with Android 3.2 Honeycomb”