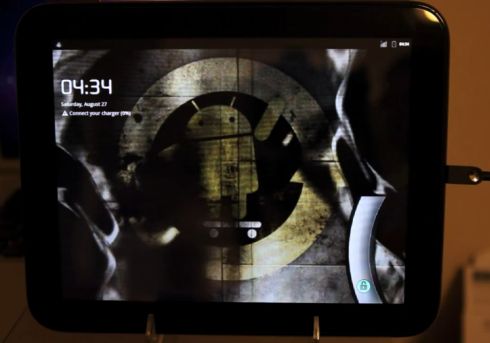 You may soon be able to install Android on an HP TouchPad tablet thanks to the developers of the popular CyanogenMod Android distribution.

Update: You can now install Android on the HP TouchPad using CyanogenMod’s tools.

The HP TouchPad ships with webOS 3.0 software, but after HP discontinued the tablet and its webOS smartphones and started liquidating the TouchPad for prices as low as $99, the tablet became a hot item — both among consumers looking for a cheap tablet and those looking to tinker by installing alternate operating systems including Android.

The TouchPad has a 1.2 GHz Qualcomm Snapdragon processor and other hardware that’s similar to what you would find in an Android device, which makes the process of porting Android to run on the device possible.

That process was accelerated recently when a couple of customers picked up TouchPads that shipped with Android preloaded instead of webOS — and at least one user shared a system dump which developers have been able to work from.

The CyanogenMod build for the TouchPad is still in the early Alpha testing stage and it’s not available to the public yet. But the developers have posted a few videos showing the tablet running the software.

The software is based on Google Android 2.3 Gingerbread, but the CyanogenMod team is adding tablet-specific tweaks.

Update 9/17: WiFi is now working, and so is the accelerometer and automatic screen rotation. Audio is still a work in progress, but the CyanogenMod team has the beginnings of audio working. There’s still work that needs to be done to take advantage of both cores in the 1.2 GHz Qualcomm Snapdragon dual core processor though.

Update 9/7: There are now working touchscreen drivers, and the CyanogenMod team have posted another video showing the tablet with working multitouch support as well as hardware graphics acceleration. Android seems to run quite well on the tablet.

Ultimately the goal is to create software that will allow users to boot both webOS and CyanogenMod or other operating systems. This won’t be the first time users have figured out how to run an alternate operating system on the tablet. You can already install Ubuntu Linux on the HP TouchPad.

The CyanogenMod developers aren’t ready to announce when the software will be available to the public — and are only showing off the progress so far because they’re trying to drum up a few more tablets for testing purposes. They’re willing to pay for them, but since TouchPads are so hard to come by these days, they’re looking for help from the community.

Other developers are also working on bringing Android to the TouchPad, including a team called TouchDroid, but that group has had a rough start due to internal power struggles.

Update 9/8/11: The TouchDroid team disbanded after it was discovered that members had stolen touchscreen drivers for the tablet from CyanogenMod without giving credit. TouchDroid left behind a code dump which anyone can use to get a very basic version of Android up and running on a TouchPad… but wireless, graphics, audio, and other features are not supported.

2 replies on “CyanogenMod bringing Android to the HP TouchPad tablet”