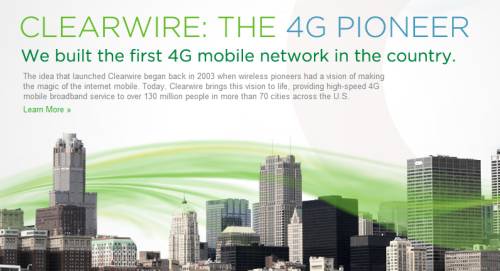 One of the biggest boosters for WiMAX technology in the US has announced plans to roll out an LTE network soon, theoretically offering ridiculously fast download speeds on the go.

Over the past few years two competing technologies have been competing in the 4G wireless broadband internet space. In one corner we’ve had WiMAX, which has been championed by Clearwire, Sprint, and a few other partners. In the other we have LTE, which has been championed by Verizon and a few other companies. There’s also something called HSPA+ which T-Mobile and AT&T like to call 4G, but while it’s faster than existing WiMAX networks, it’s based on older technology.

Clearwire has been offering WiMAX in a handful of US markets since 2009, typically offering download speeds of around 6 Mbps. That’s not amazing compared to cable, fiber optic, or even DSL standards, but it’s a heck of a lot better than you’ll get from most 3G technologies which allow you to get your phone, laptop, or tablet online without relying on a WiFi hotspot.

But Verizon’s recently launched LTE network offers download speeds in the 5 to 12 Mbps range, making it a more attractive alternative for customers.

Now Clearwire has announced that it will one-up Verizon by adding “LTE Advanced-ready technology” to its network. LTE Advanced offers even faster speeds than 4G LTE, and under test conditions Clearwire has seen speeds of 120 Mbps and faster. It’s likely that actual speeds will be slower by the time the service goes live in the US, but theoretically Clearwire could offer the fastest mobile broadband network in the US. By definition, the LTE Advanced standard supports peak speeds of 100 Mbps or higher.

The idea is to add LTE to some of the major urban areas where Clearwire already offers WiMAX service. The company doesn’t plan to kill the WiMAX network right away — so if you have a Clearwire modem you probably won’t have to buy new hardware or sign up for a new service plan immediately. But it’s unlikely that the company will expands its WiMAX service to additional markets and I wouldn’t be surprised to see the Clearwire phase out that technology in the coming years.

There’s only one catch with Clearwire’s big plans… but it’s a big one: According to the press release, the LTE plan is “subject to additional funding.” So there’s always a chance that it simply won’t happen.

One reply on “Clearwire jumps on the 4G LTE bandwagon (120Mbps mobile broadband coming to America?)”