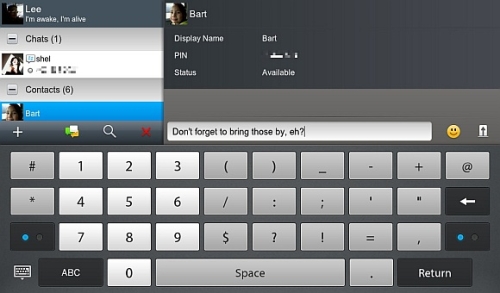 The BlackBerry PlayBook has made a respectable showing in the tablet market so far. RIM isn’t blowing through PlayBook inventory like iPad 2s, but with more than half a million shipped and strong sales posted in some corners of the globe, things are looking pretty rosy for the Waterloo company. Next month, the PlayBook is going to get a little more attractive — with the arrival of BBM and a native email client.

PlayBook owners could already access BBM and email via BlackBerry Bridge, but that only works if your tablet is paired with one of RIM’s smartphones as well. Business Insider confirms that a full-fledged email app and BlackBerry Messenger will both be arriving in September, and those additions will bring a much-needed infusion of standalone functionality.

For a company with such a strong enterprise pedigree, the lack of email and RIM’s trademark messaging service caught just about everyone in the tech world off guard. Their absence was off-putting to consumers, too, who naturally assumed any device with the BlackBerry logo on it would let them message their friends using BBM.

Now if RIM would just hurry up and release the Android Player app, PlayBook users would really be able to tap into the hardware’s full potential. No word yet on whether or not that’s going to happen in September as well, but don’t hold your breath.

5 replies on “BlackBerry PlayBook finally getting BBM and native email”