The Asus Eee PC X101 is the thinnest and lightest 10 inch netbook to date from Asus, and it’s the first to run MeeGo Linux. But in a Q&A posted on the Asus Tech in Style website, product manager Brian Tang says one of the reasons for the slim design is that Asus doesn’t just want the X101 to compete with other netbooks — it’s also aimed at the tablet market. 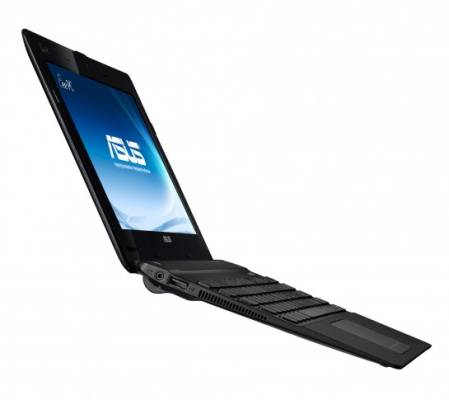 That makes a lot of sense, because if you think about it the Eee PC X101 shares a lot of features with modern Android or iOS tablets. It uses a non-Windows operating system which is designed specifically for mobile devices. It sacrifices full-sized Ethernet and VGA ports in order to keep a thin and light design. The lowest priced model, which will run about $200, also features just 8GB of storage — which isn’t very much by tablet standars, let alone by netbook standards.

On the other hand, I think Asus learned a few things from the launch of the Eee PC 701 back in 2007. That netbook originally shipped with a custom Linux-based operating system as well. But the Xandros software that came on the first netbook was a little too simple and didn’t allow users to install third party apps very easily without learning a little more about Linux than they may have been comfortable with.

When you hand someone a product that looks like a laptop, even a tiny laptop, they expect to be able to do the things they’d expect to do on a full-fledged computer. So it seems like a gamble to offer up MeeGo instead of Windows.

MeeGo is capable of running most popular Linux-based apps such as OpenOffice.org for editing documents, Firefox or Google Chrome for surfing the web, or many other applications for editing pictures, playing music or movies, or sending instant messages. But if you expect to be able to run PhotoShop or Microsoft Office, and not just programs that are compatible, MeeGo may not be what you need.

It sounds like Asus may be downplaying the Eee PC X101’s personal computer pedigree though, and instead emphasizing the MeeGo version of this netbook as a more tablet-like device at least in part to lower people’s expectations.

MeeGo is backed by chip-maker Intel, so it also has a lot more support than the Asus version of Xandros ever did. And while Asus is the first big-name company preparing to launch a netbook running the operating system, if this experiment proves to be a success I suspect it may not be the last.

Asus has also customized the MeeGo user interface by adding its own social apps, media storefront, and access to an Asus-branded app store (which I suspect may just be what you get when you slap the Asus name on Intel’s AppUp Center).

The biggest thing Asus may have going for it with the company’s MeeGo experiment though, is the fact that Asus isn’t going all-in. There will also be an Eee PC X101H model which does have Ethernet and VGA ports, plus a hard drive with up to 320GB of storage space. Asus will offer the Eee PC X101H in both Windows and MeeGo Linux editions, although not all models will be sold in all parts of the world.

One reply on “Asus: The Eee PC X101 is a netbook aimed at the tablet market”