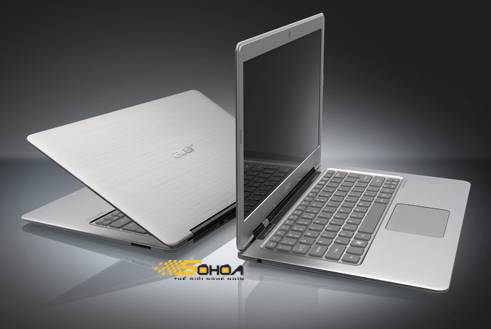 A number of companies including Asus, Acer, are said to be working on thin and light laptops with the latest Intel processors. Intel calls them ultrabooks, but it looks like Acer may call its model the Aspire 3951. A Vietnamese website has posted details about the upcoming laptop and it sure looks like it fits the definition of an ultrabook.

The Acer Aspire 3951 reportedly has a 13.3 inch display and weighs about 3 pounds. It has an aluminum case, a touchpad without any physical buttons, and an island-style keyboard (with flat keys separated by small gaps), which is going to make comparisons with Apple’s MacBook Air inevitable.

While Intel has suggested that ultrabooks would have solid state disks instead of hard drives in order to offer faster performance and quick boot and resume-from-sleep times, it looks like the 160GB SSD will be optional on the Aspire 3951. It will also be available with a 250GB or 500GB hard drive.

The laptop will reportedly get about 6 hours of battery life and resume from sleep in about 1.7 seconds. It’s expected to cost less than $1000.

There’s no word on when the Aspire 3951 will hit the streets.