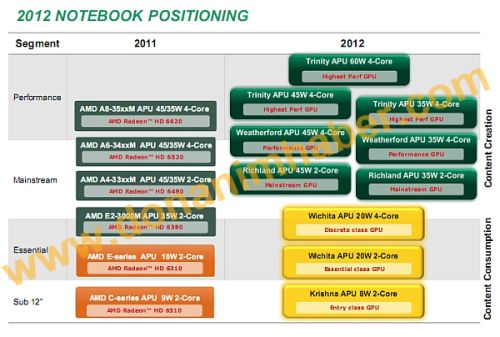 Chip-maker AMD plans to launch a new line of low power chips for notebooks and tablets next year. That’s no surprise. The company has been talking about its upcoming Krishna dual core processors and Wichita chips with up to four cores since last year. But Turkish site Donanim Haber has obtained a leaked product roadmap that sheds a little more light on the upcoming processors.

The Krishna processor will be a dual core chip with “entry level” graphics and a TDP of 8W. That makes the new chip a pretty good replacement for the 9W AMD C-Series processors that hit the market earlier this year.

Wichita chips will come in dual core and quad core varieties. Both versions will be 20W chips with higher performance graphics. While these processors will use more than twice as much power as the Krishna chips, 20W is still pretty efficient by traditional notebook standards, which means you should get decent performance and excellent battery life from a laptop with a Wichita chip (and a decent battery).

One reply on “AMD to launch 20W quad-core chips for laptops, tablets next year”