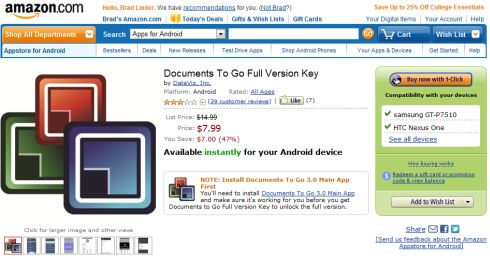 Amazon has yet to confirm that it’s even working on an Android tablet, but the rumors continue to persist. The latest comes from DigiTimes, which reports that Amazon will offer two tablet models: A 7 inch tablet which should be ready to ship in October and a 10.1 inch version which will go into mass production in the first quarter of 2012.

The report says that Taiwanese original equipment manufacturer Quanta will build the 7 inch tablet for Amazon while the larger version will be handled by Foxconn. Amazon’s popular Kindle eBook readers are also built by Foxconn. It’s not clear why the company would choose a different OEM for its 7 inch tablet.

Amazon’s move into the tablet space would make a lot of sense. The company already has a digital book store, digital music store, digital movie store, and even an app store for Android software. The Kindle is a consumer device that’s tightly tied to Amazon’s digital eBook service, but a tablet would be able to tie into all of Amazon’s digital offerings.