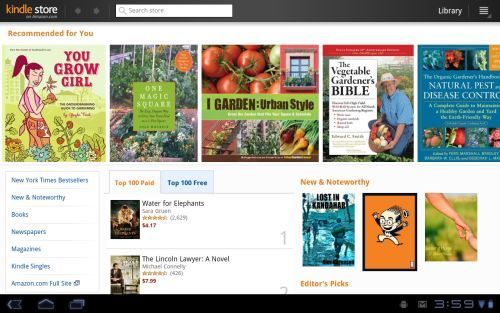 Amazon is expected to launch an Android tablet in September or October. The company is well positioned to make money off its Amazon Appstore for Android apps, Amazon MP3 music service, Kindle eBook store and other digital media properties, so it wouldn’t be surprising to see Amazon sell its tablet near or even below cost.

The New York Post reports that the Amazon tablet will launched for “hundreds less than an entry-point $499 iPad.” In other words, if the Post’s source is to believed, the device will likely sell for $299 or even less.

Apple’s iPad currently dominates the consumer tablet space, but as HP recently showed, consumers are willing to spend money on a competing tablet… as long as it’s not too much money. The HP TouchPad didn’t sell very well at $499, but when the price dropped to $99 stores had a hard time keeping it in stock.

I doubt Amazon is going to sell a tablet for as little as $99 when the Amazon Kindle eReader sells for $139. But at $299, the company might be able to sway a few potential iPad buyers. At $199 the company could also probably fend off competition from competitors including Acer, Asus, Dell, Lenovo, and even budget device makers such as Archos.