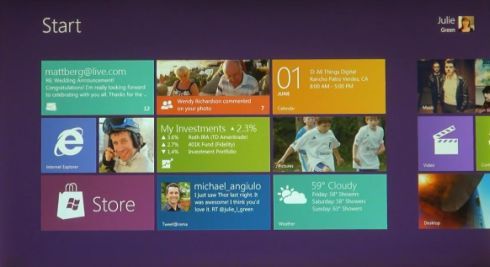 After that whole Vista mess, Microsoft learned a valuable lesson about hardware requirements and its operating systems. First, it’s a terrible idea to let your OEM partners ship systems that are barely capable of running the new OS you’re asking them to install on them. Second, if you can deliver a new OS that runs on hardware that could run your last-gen OS, everyone will cheer. Windows 7 was a major victory in that respect, and in many cases it ran better than Vista on the same hardware.

That trend is going to continue with Windows 8, it seems, with Microsoft’s Tami Reller announcing that if your current system can run Windows 7, it’s going to run Windows 8 just as well. But while that’s good news for consumers, Microsoft was trying to hammer that point home to two other very key groups: OEM system builders and enterprise IT staff.

For system builders, the message is simple: don’t worry about having to cram more powerful (and more expensive) hardware into your PCs. Stay the course, and simply substitute Windows 8 in for Windows 7 once the RTM happens.

For IT staff, it’s equally clear — and it has a lot to do with today’s reminder that XP long-term support is on its last legs. If you’ve been holding off on upgrading to Windows 7 and planning to ride the XP wave until the next version of Windows comes out, don’t. Upgrade to Windows 7 now.

If the hardware you’re attempting to upgrade can’t handle the move to Windows 7, it won’t handle Windows 8 either. Likewise, you can rest assured that any new systems you purchase in the months prior to launch that ship with Windows 7 will run Windows 8 without a hitch. Upgrade now and avoid headaches down the road. Rollouts don’t happen overnight, after all, and the 1,000-day timer counting steadily down.

One other interesting tidbit mentioned by Reller was that Windows 8 will be able to adapt itself and optimize the user experience automatically based upon its own hardware analysis kung-fu. Windows 7 and Vista could already sort of do that (think automatically disabling Aero Glass when hardware can’t handle it), but this “intelligence” in Windows 8 will be much more sophisticated.

13 replies on “Windows 8 will run on today’s computers, no hardware upgrades required”