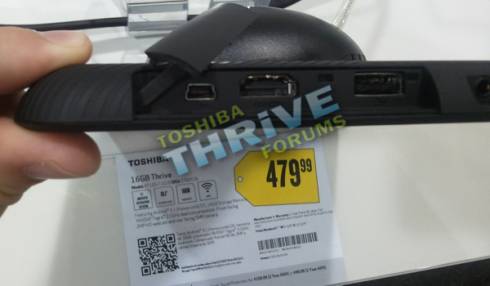 The Toshiba Thrive is a 10 inch Android tablet with a few features that set it apart from the crowd. It has a full-sized USB port and a full-sized SD card slot. The tablet also has a removeable back panel which makes it easy to replace the battery. The tablet is scheduled to go on sale in the US Sunday, but several web sites are reporting that the tablet went on sale a bit early at some Best Buy locations.

A member of the Thrive Forums spotted a 16GB model in Austin Texas. Meanwhile an Android Central forum user snagged one from a Best Buy store in Atlanta, Georgia.

It seems likely that these two stores set out the tablet by mistake, so I wouldn’t necessarily expect to find Toshiba Thrive units at all locations. But if you happen to be in the market for Toshiba’s first tablet to run Google Android 3.1 Honeycomb and you don’t feel like waiting until this weekend it might be worth making a trip to the local Best Buy.

One reply on “Toshiba Thrive appears at some Best Buy locations”