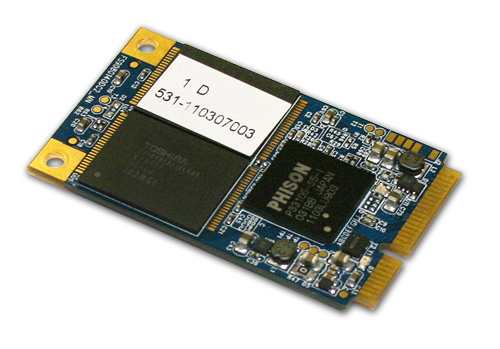 Solid State Disks come in all shapes and sizes, offering low power, quieter, and faster storage alternatives to traditional hard drives. But they also tend to be more expensive. MyDigitalDiscount‘s latest line of SSDs are relatively inexpensive solutions given the price.

The online retailer has been producing a line of SSDs for netbooks, notebooks, and tablets as part of its MyDigitalSSD line for a while. The company offers what it calls “Bullet Proof” solutions which are generally more problem-free than some alternatives. They also tend to be some of the more affordable SSD solutions.

The company sent us a 64GB model for the purposes of this review.

Like many of the other mSATA drives on the market, the MyDigitalSSD 50mm Bullet Proof mSATA complies with the JEDEC MO-300-B standard that in addition to the full size Mini PCIe drive form factor also conforms the normal SATA power and data I/O interface into a Mini PCIe form factor interface that is compliant with SATA I/II specification.  However, not all mSATA drives follow this particular standard for the drive size and that means you should make sure your system is set to receive the 50mm and not 70mm length drives.

The company promises read speeds up to 270MB/s, write speeds of up to 200MB/s, 4KB random read IOPS of up to 35,000, acess times of 0.1ms, RAID support, TRIM support, sudden power-off recovery and RoHS Compliance.

There are pluses and minuses to both methods but it should be noted that this buffer feature is harder to provide with the limited physical space on a Mini PCIe form factor SSD.  So the buffer capacity is likely to be smaller than on larger drives but there is a Zentel cache buffer on this MyDigitalSSD 50mm mSATA and this method does mean you can use more of the drive capacity versus the same capacity NAND chips on a SandForce based drive without worrying too much about loss of reliability and longevity.

However, drive corruption can occur that can impair performance.  The drive sent to me had some performance issues at first, but I attribute this to the drive being previously reviewed and used, and a full format cleared it up.  So it’s not an issue most will encounter. It may be due to a combination of the sudden power-off recover feature and the nature of the DRAM buffering if the drive endures system crashes and other abuses that can cause such drive corruption.

The sudden power-off recovery feature is also what can let you recover from a crash that may have otherwise rendered the drive unusable without a complete reformat. But while this feature gives you a better chance of saving your data before the drive gets too corrupted it doesn’t completely protect the disk and in some situations you may still need to reformat the disk to clear up issues.

So I’d recommend doing a drive wipe or at least a full format, don’t do a quick format, when preparing the drive for use. That way you can ensure maximum performance.  You may want to consider also purchasing a mSATA USB enclosure adapter because if the drive does become corrupted then it may be hard to fix with a regular SATA connection, since the system can become unresponsive or very slow, but USB interface should let you access and re-format the drive without issue.

The review unit sent to me included a Lenovo Idealpad Y460, which is one of the few models that already support mSATA.  While the MyDigitalSSD 50mm Bullet Proof mSATA SSD came in a simple bubble wrap packaging and nothing else.  So you’ll need to provide your own tools and screws for securing the drive yourself.  Fortunately for testing purposes I also received a Renice K3VLAR 50mm mSATA package, which includes a Renice mSATA to SATA adapter, that I also reviewed and allowed me to also test the MyDigitalSSD in my desktop system for additional benchmark comparisons.

All i/o data interfaces operate with some overhead that reduces actual performance below its theoretical max that the given specification is rated for.  So the SATA II (300 MB/s or 3.0 Gb/s) specification means Solid State Drives can only offer up to 285/275 MB/s max read/write speed.  There are some diminishing returns as the drive starts to push the limits of the SATA II interface, and everything from the drive performance to the system performance can effect how close it gets to that limit.

So the performance of the smaller read/writes become more significant as those are the figures that aren’t hampered by the upper limits of the interface and thus can see the most gains in performance.  So keep that in mind when comparing the following benchmarks. 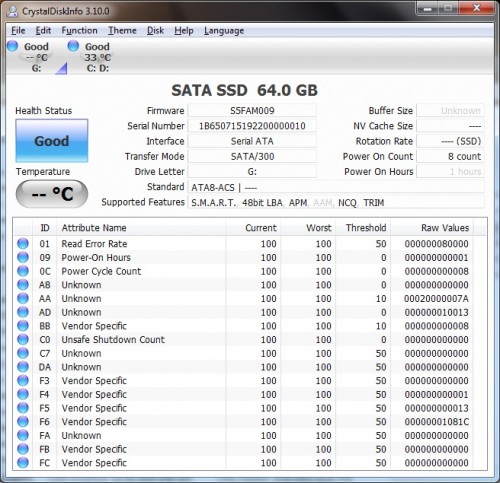 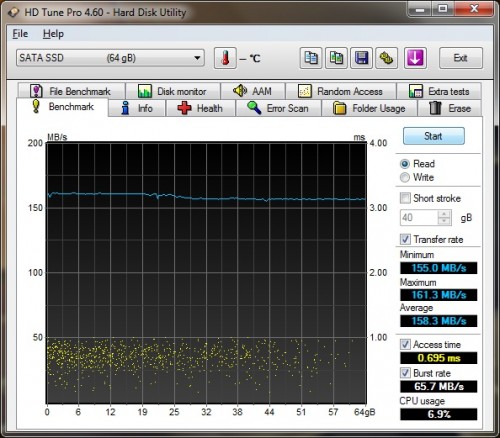 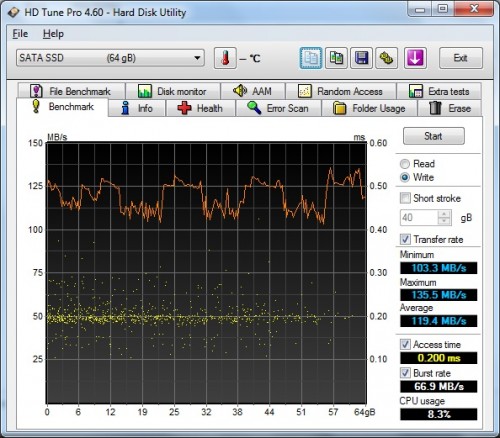 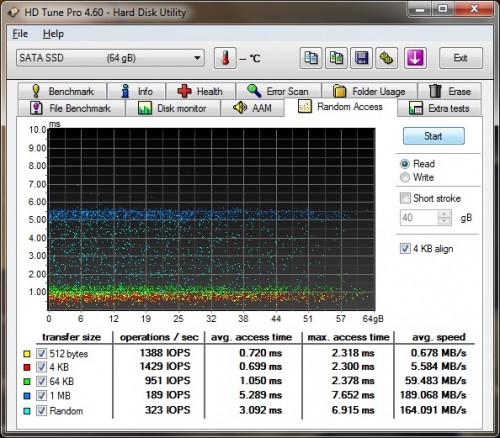 The random access write tests are an important performance area to look at because some controllers have problems with random writes and thus helps indicate how consistent the performance will be. 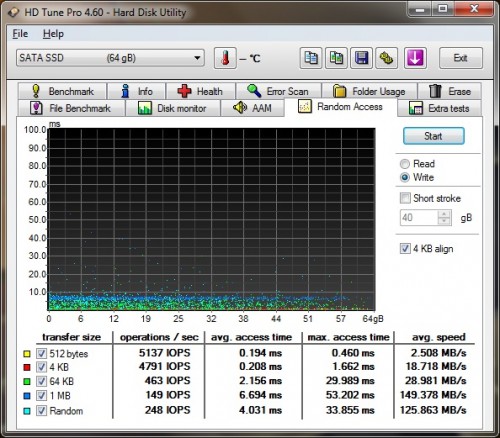 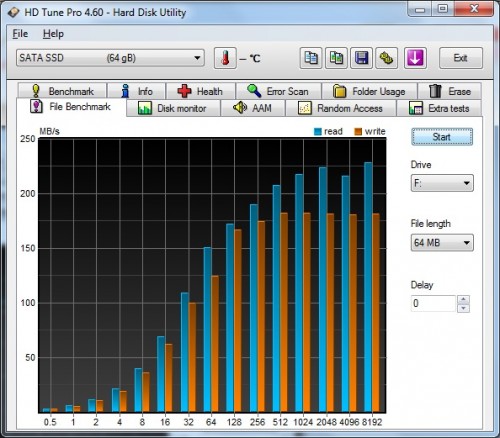 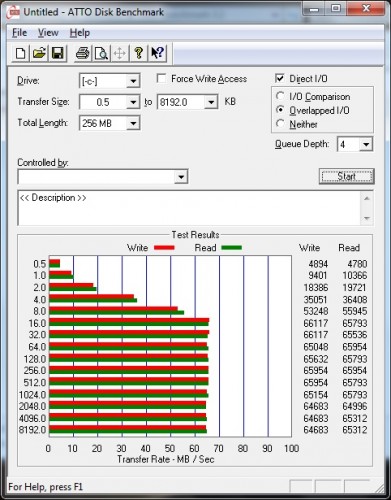 For the CrystalDiskMark benchmarks, the different modes help show not only the general drive performance but also whether the drive’s controller methods for lowering write amplification (reducing this helps the drive last longer) will affect drive performance.  Many write amplification reduction methods put a greater reliance on the controller and firmware that can result in some benchmarks giving results that are less than the drive is rated for. So take note of how the following CrystalDiskMark results vary with both the default random mode and the specific fill modes.

The difference in file size setting helps show the possible differences between possible drive memory buffer performance and sustained performance that is more indicative of actual drive read/write speeds. Of course, this depends on how effective the buffer is. 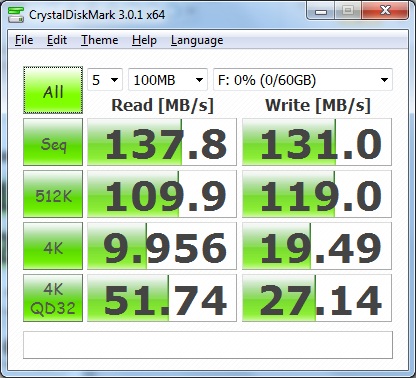 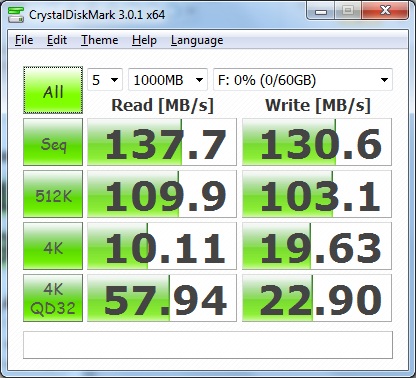 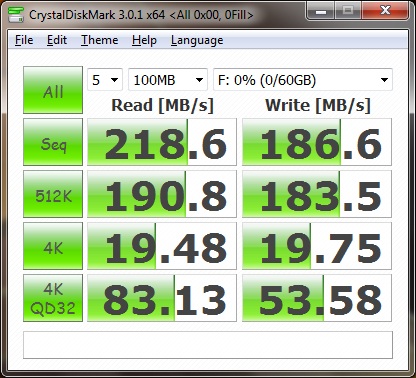 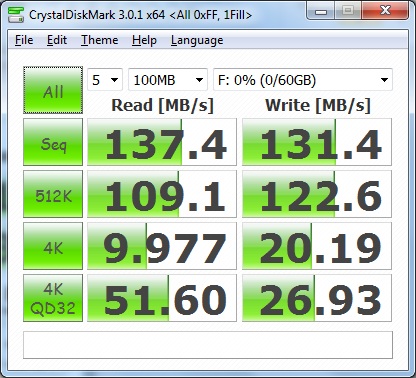 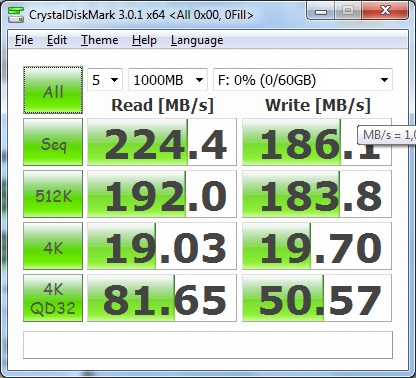 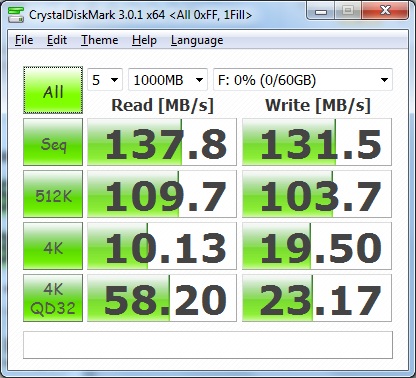 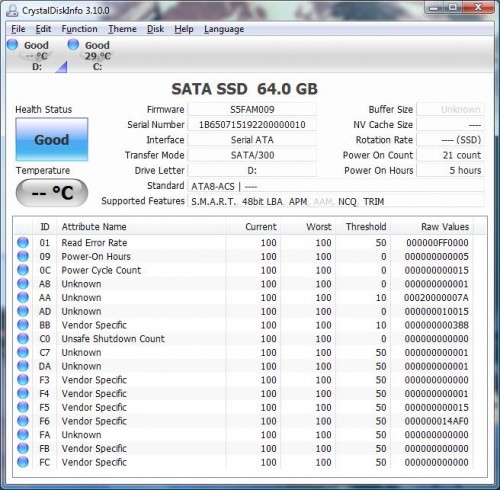 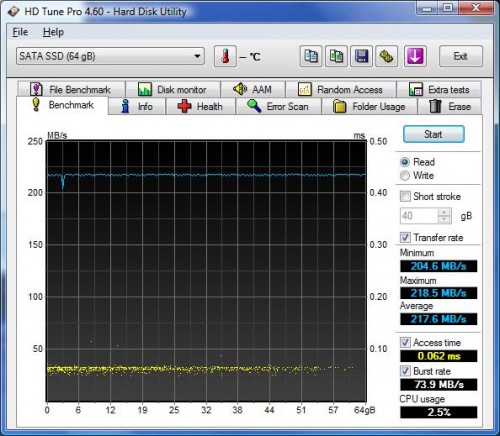 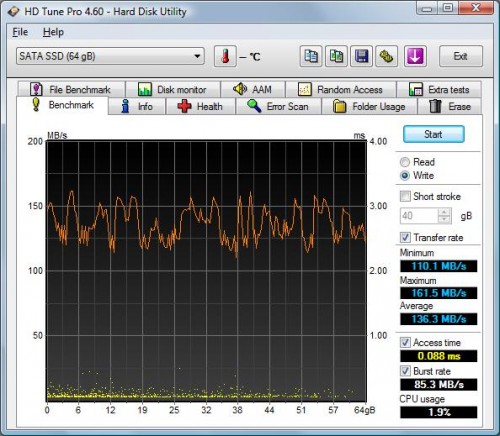 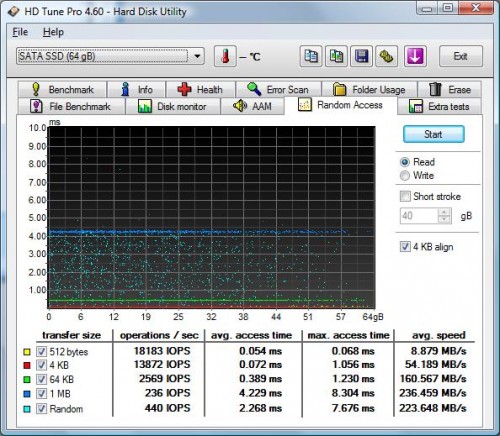 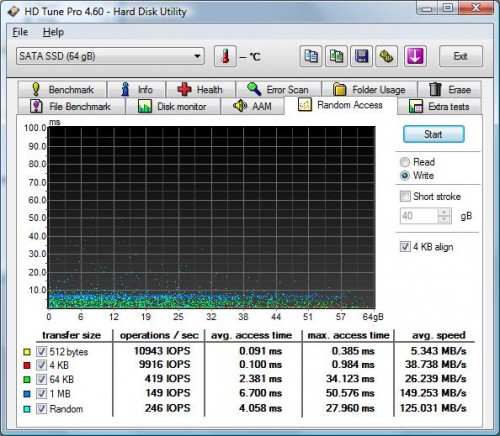 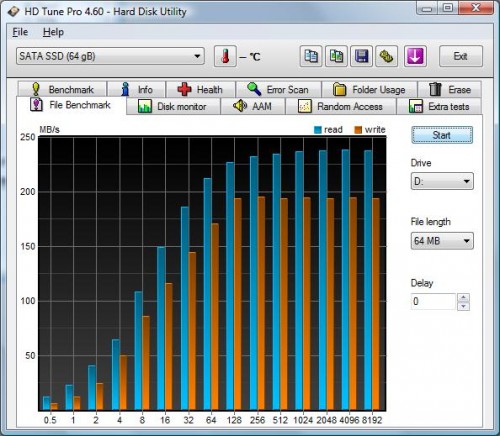 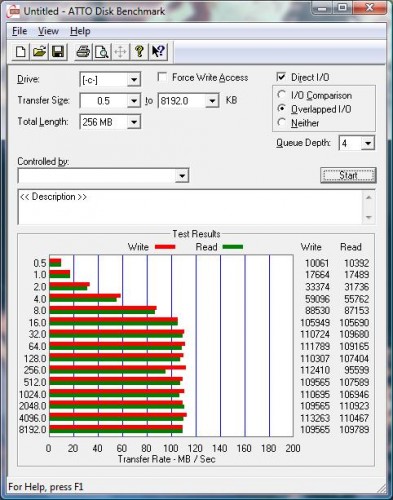 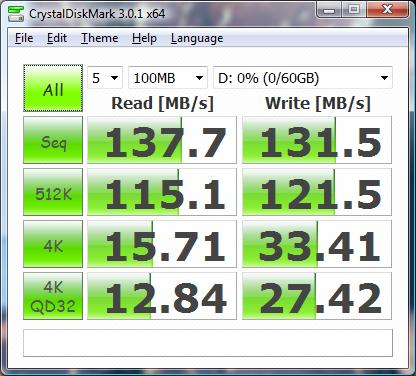 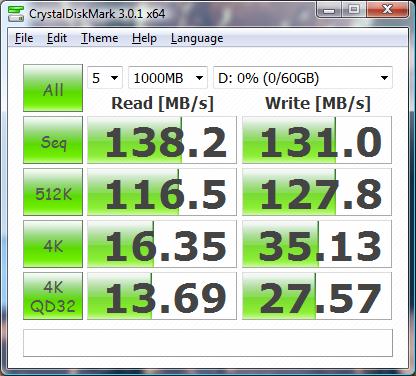 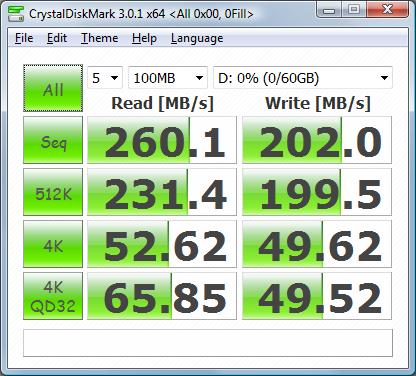 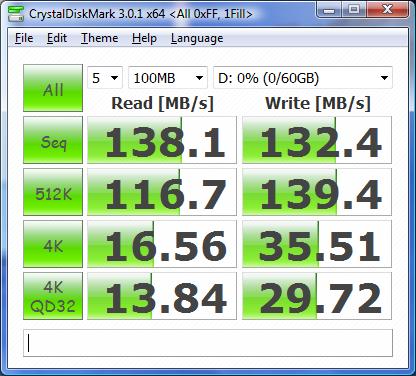 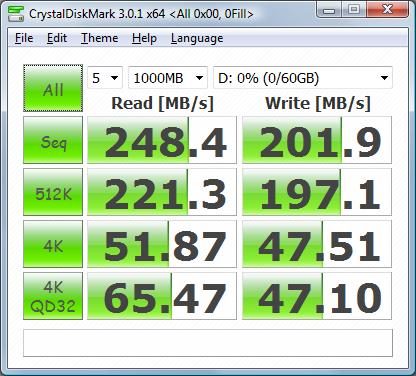 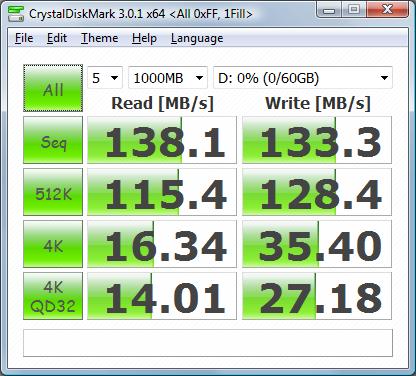 You can also check out the review of the same drive done by TweakTown for results on yet another computer. The reviewer tested the drive with a computer with an Intel Core i5-2400 processor.

The MyDigitalSSD 50mm Bullet Proof mSATA SSD is a good performer for the price. It has a lower price for capacity ratio than many other Solid State drives.  While it isn’t the highest performing mSATA drive available, the performance is still more robust than other competitively low priced drive offerings and provides most of the benefits one would expect from a SSD upgrade including reasonably fast read/write speeds, lower power consumption than you would get with a hard drive, lower heat generation, and quieter operation.

SSDs are generally vulnerable to corruption from power interruptions, especially with drives that utilize DRAM buffers that lose data when power is cut. But this drive’s sudden power-off recovery feature should help limit the impact of such events and give you a better chance to recover your data before taking more drastic actions to get the drive working again.