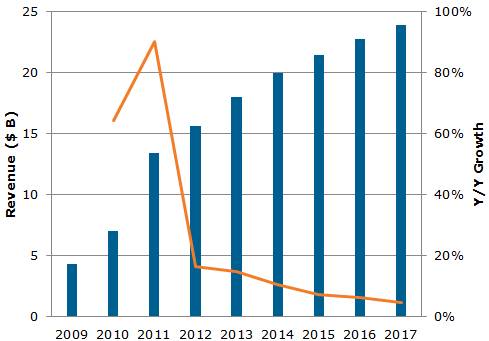 You know all those smartphones, tablets, all-in-one computers and other devices with touchscreen displays that are on the market? Apparently people like them, because the folks at DisplaySearch have put out a report suggesting that revenue from touch panel sales will hit $13.4 billion this year. That’s up about 90 percent from last year.

Smartphones are still leading the way in the touchscreen space, with phones making up about two thirds of the devices with touch panels that shipped last year. But tablets are moving up th efood chain, with 26 million units shipped last year and DisplaySearch suggesting the number could hit 72 million this year.

The company predicts that revenue from touch panel sales could reach nearly $24 billion by 2017, but that’s the sort of forecast I’d take with a grain of salt. While touchscreen tablets and other devices seem to be doing a bit better in the market than, say, 3D TVs, it still feels a bit early to be gazing into a crystal ball and making predictions 6 years out for a class of products that barely existed 6 years ago.