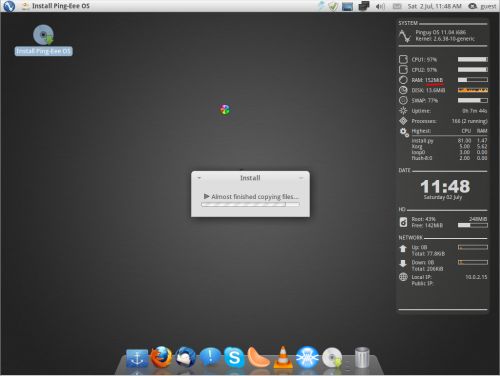 When I took a look at Pinguy OS Mini a few weeks ago I was impressed with the Linux-based operating system’s ease of use and simple interface for computers with low resolution displays… like netbooks. But somehow I failed to notice that the developer also has a version of the operating system designed specifically for netbooks.

It’s called Ping-Eee, and in case the name wasn’t a giveaway, it’s designed to play well with Asus Eee PC netbooks, but it should work well on many other mini-laptops as well.

The operating system comes with Jupiter pre-installed. That’s a utility that makes it possible to underclock or overclock an Intel Atom processor to deliver better performance or battery life. The developer has removed several applications which use a lot of memory since most netbooks ship with 1GB of RAM or less.

The disc image is 1.38 GB and you can either burn it to a disc to install or use UNetbootin to install Ping-Eee using a USB flash drive.

5 replies on “Ping-Eee Linux: An operating system designed for netbooks”