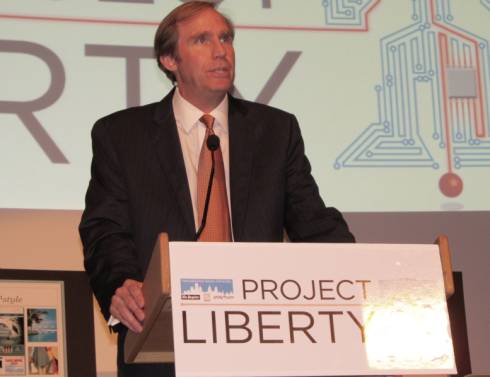 The Philadelphia Inquirer and Philadelphia Daily News will be the first newspapers in the United States to sell an Android tablet to consumers that sign up for a digital subscription. At an event this afternoon Philadelphia Media Network President Greg Osberg outlined the plan — but it’s still in the early stages.

Here’s what we know so far. Sometime in the next four to six weeks Philadelphia Media Network (the company that publishes both newspapers) will announce the brand of the Android tablet and the pricing. The company is still in talks with manufacturers, but the PMN will offer subscribers a tablet from a company that currently offers a tablet.

In late August the publisher will launch a limited pilot project in Philadelphia, offering “more than 100, but less than 100,000” tablets to subscribers on a first-come, first served basis. AdWeek reported this morning that the number might be about 2,000. If that project is successful, the company will offer more tablets in the future.

At launch the Android tablet will be a WiFi-only model, but 3G and/or 4G models could be available down the road.

There will also be an iPad app unveiled soon — but Philadelphia Media Network has no plans to offer subsidized iPads to subscribers.

From the sound of things, PMN will be offering at least two different forms of content for Android tablets. You’ll be able to view a digital reproduction of the newspaper, and also a mobile news app which offers news in a format optimized for an interactive tablet. Osberg says there will also be some app-only content which is not available in the print editions of the newspapers or on the web site.

It should be interesting to see whether the promise of a news-and-tablet bundle will encourage Philadelphians to sign up for subscriptions at time when print subscriptions to newspapers continues to fall. Osberg was also talking up the advertising opportunities inherent in the new medium. Not only will PMN be offering ad space inside apps, but the company could even bundle advertisers’ apps with the tablet so that the first time a subscriber turns on the device they’ll see the advertisers’ content alongside the newspapers’.