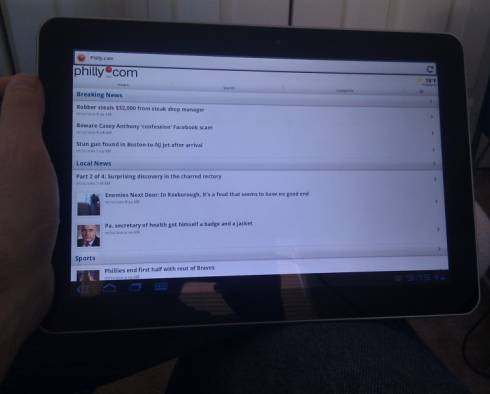 The Philadelphia Inquirer and Philadelphia Daily News may be the first two newspapers in the US to sell discounted Android tablets along with digital newspaper subscriptions. According to AdWeek the final pricing hasn’t been set yet, but the goal is to offer a roughly 50 percent discount on the tablet and the digital subscription.

Philadelphia’s two largest newspapers are actually owned by the same company: Philadelphia Media Network. The company currently charges about $2.99 per week for a digital subscription, while Android tablets can run anywhere from $99 to $700 depending on which device you purchase. It’s not yet clear exactly what Android tablets the publisher will offer, but AdWeek suggests that a pilot program will start in late August with about 2,000 tablets offered.

I wouldn’t be surprised to see newspapers offer this sort of deal with a low cost tablet aimed at readers — such as the Barnes & Noble NOOK Color. The tablet already sells for a relatively low price of $249 and can often be found on sale for under $200.

If Philadelphia Media Network can lower the price even further while locking customers into a 1 or 2 year subscription, it could be a win/win for the papers and for consumers. Philadelphians would be able to pick up cheap tablets for reading the paper, surfing the web, and perhaps running some apps, while the newspaper publisher would gain subscription revenue, lock readers into a contract, and help keep traditional news reporting relevant as readers shift from print to digital formats.

Update: At a press event this afternoon the company unveiled some more details about the plan. There’s still no word on what brand of tablet subscribers will get, but at launch there will be a limited number of WiFi-only devices and eventually a 3G or 4G model could be in the works. The company will also offer a new iPad app (nope, they don’t have one yet), but there are no plans to offer subsidized iPads.