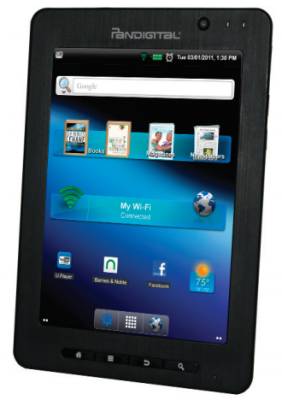 Pandigital has a long record of releasing Android tablets and calling them eBook Readers to keep your expectations low.The company’s latest device made a stop at the FCC this week, and brought some photos and a user manual along for the ride. It’s called the Pandigital SuperNova, and it’s described as a Tablet eReader, so it looks like Pandigital is embracing its Android side.

The SuperNova ships with the Barnes & Noble NOOK eBook app and store preloaded. But as a general purpose Android tablet there’s nothing stopping you from installing any eReader app you like.

It appears the tablet is powered by an ARM Cortex-A8 chip from Samsung called the S5PV210AH-80.

The user manual also suggests you can connect a keyboard, mouse or other USB peripheral to the Pandigital SuperNova — which is odd, because that’s a feature that’s built into Google Android 3.1 Honeycomb, but I wasn’t aware that it was available in Gingerbread. I suppose it’s possible that Pandigital developed its own software to support USB accessories.

You won’t find any information about the price or launch date, but given the specs I suspect the Pandigital SuperNova will be rather cheap for an Android tablet, but kind of expensive for an eBook reader.