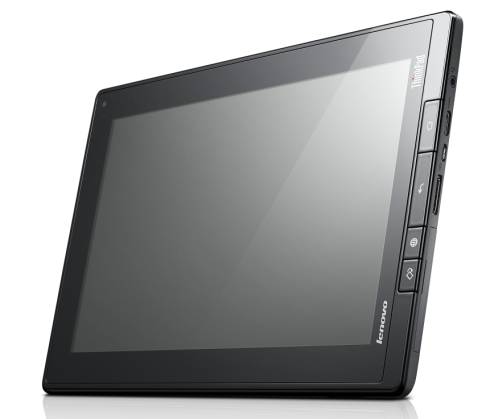 What do you get if you take the Lenovo IdeaPad K1 Android tablet and stuff it into a business suit and tack on a few enterprise features? Apparently what you get is the Lenovo ThinkPad Tablet: a new 10 inch Android tablet from Lenovo aimed at business customers.

The ThinkPad Tablet has all the usual specs including a 10.1 inch, 1280 x 800 pixel display, 1 GHz NVIDIA Tegra 2 dual core processor, WiFi, HDMI, optional 3G, Android 3.1 operating system, and up to 64GB of storage. But this table also has a few other features up its sleeve including a pressure-sensitive Think Pad Tablet pen for writing or drawing, and a Folio keyboard case with Lenovo’s TrackPoint system.

Like the Toshiba Thrive Android tablet, the ThinkPad Tablet also has a standard sized USB port and SD card reader for copying files to and from the device. There’s also support for encrypting data on an SD card. Customers will also get 2GB of free cloud-based storage which should make it easier to move files to and from the tablet.

The tablet has an IPS display with Corning Gorilla Glass, so it should be rather difficult to break. It measures 10.3″ x 7.2″ x 0.6″ and weighs 1.58 pounds. That makes the ThinkPad Tablet a little smaller and lighter than the IdeaPad K1, but difference is pretty small.

One unusual design decision is the inclusion of physical buttons on one side of the device, since Google Android Honeycomb is designed to be used without any buttons. But while older Android devices typically had home, menu, back, and search buttons, this tablet has a slightly different layout with home, back, browser, and screen orientation lock buttons.

Lenovo will preload the tablet with DataViz Documents To Go software for viewing and editing Microsoft Office documents.

Aside from the Keyboard Folio case, Lenovo will offer an optional ThinkPad Tablet dock with HDMI, USB, mic, and stereo output jacks.

The Lenovo ThinkPad Tablet goes up for order today with a starting price of $479. It will be available throughout the US in August and it’s due out in the rest of the world during the third quarter of 2011.