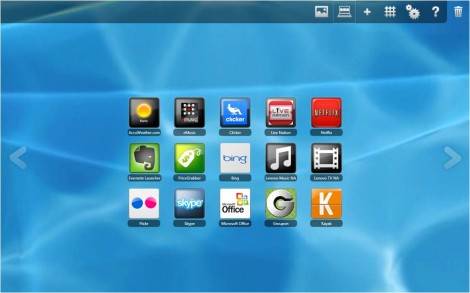 Apple changed the way we think about operating systems with the introduction of iOS a few years back. Instead of a taskbar and desktop, the touch-based iPhone, iPod touch, and iPad feature a home screen with nice big icons for launching applications and not much else. Google Android and webOS took things a bit further by adding pull-down notification windows, support for widgets, and multitasking. But the key to all of these operating systems is that they’re designed to be touched with your fingertips.

That’s why I don’t really get it when companies decide to try to make desktop and laptop computers look like iOS, Android, or webOS. But that hasn’t stopped them from trying. For a few years Canonical offered an Ubuntu Netbook Remix which looked an awful lot like iOS. Joli OS is another Linux distribution that looks like it was made for a touchscreen. And Apple’s OS X Lion has a LaunchPad program launcher that looks like it was pulled straight off the iPad and thrown onto your MacBook.

Now Lenovo is getting in on the action with SimpleTap 2.0. It’s an application launcher designed to run on certain Lenovo computers. It looks like iOS on your desktop PC. There are a few key differences though. First, you can customize the SimpleTap 2.0 theme or arrange the app icons any way you like.

Second, when you tap on an app it doesn’t necessarily open in a full screen window. Instead many apps appear to work like widgets, displaying a small pop-up window with information such as a weather forecast or travel planning tools.

The third and probably most important difference is that while SimpleTap can be used on Lenovo ThinkPad tablets with touchscreen displays, it’s also meant for use on laptop or desktop computers with a keyboard and mouse — I just can’t really imagine why you’d want to use it on one.

Anyway, you can check out a demo video below. If you’re using a Lenovo computer you can also try out the software by downloading it from lenovo.com/simpletap. Unfortunately it doesn’t want to install on non-Lenovo machines, so I wasn’t able to test it myself.

Lenovo has actually been working on SimpleTap software for a few years, but earlier builds were designed primarily for tablets, giving you a way to access hardware controls for feature such as volume, screen brightness, and wireless toggles using a touchscreen — even if the tablet was positioned in a way that made it difficult to access the physical hardware buttons.