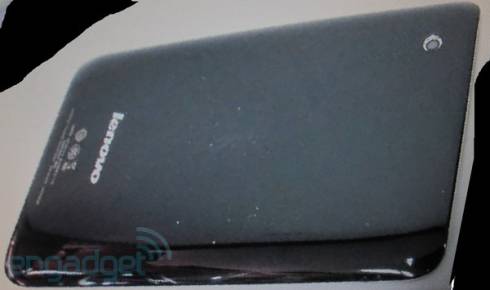 This week a gadget showed up at the FCC web site wearing little but an FCC ID label with the Lenovo A1-07 name on it. Now the folks at Engadget have posted photos of a device that could be the mysterious A1-07: An Android tablet with a 7 inch display.

If the tipster that sent the photo to Engadget is correct, the tablet features a 7 inch, 1024 x 600 pixel display, a Texas Instruments OMAP3621 processor, and a 3700mAh battery as well as GPS and 3G connectivity.

The device also seems to have front and rear cameras as well as buttons below the screen which would suggest it’s designed to run Google Android 2.3 Gingerbread or earlier since Android 3.x Honeycomb doesn’t use physical buttons.

It’s possible the photo is doctored. The image could also be showing an early prototype or a knockoff. We won’t really know anything for certain unless Lenovo weighs in, but I wouldn’t hold my breath waiting for that to happen.

Lenovo officially unveiled three tablets this week: The Lenovo IdeaPad K1, Lenovo ThinkPad Tablet, and Lenovo IdeaPad P1. All three have 10 inch displays, with the first two devices powered by Google Android 3.x Honeycomb and the last designed to run Windows 7. The company has yet to make any announcements about a 7 inch model, but a leaked product roadmap from earlier this year did mention a 7 inch device with a 1280 x 800 pixel screen.