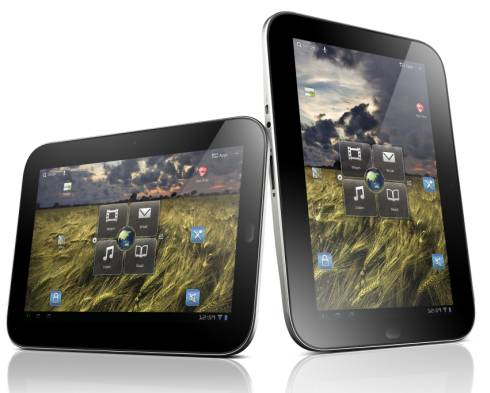 In a move that should surprise nobody that’s been following Android tablet news lately, Lenovo is officially launching the IdeaPad K1 Android tablet. The tablet has been popping up at retail sites for the past few weeks, has already showed up in a demo video on Lenovo’s web site, and closely resembles the Lenovo LePad which is already available in China. But the Lenovo IdeaPad K1 goes on sale in the US today for $499 and up.

The tablet features a 10.1 inch, 1280 x 800 pixel display, a 1 GHz NVIDIA Tegra 2 dual core processor, 1GB of memory, and up to 64GB of storage. It features Bluetooth, 802.11b/g/n WiFi, and optional 3G connectivity and has a front-facing 2MP camera and rear 5MP camera. The IdeaPad K1 has a micro SD card reader, mini HDMI port, and a port for a docking station.

Lenovo’s consumer oriented tablet runs Google Android 3.1 with a few custom apps including an application launcher widget that lets you place buttons for frequently used programs in the center of your home screen. There’s also an app called “SocialTouch” that allows you to manage Facebook, Twitter, and other social networks all from one app.

Like many other tablet makers, Lenovo will be offering its own Android app store and media store, but the IdeaPad K1 also ships with access to Google’s Android Market which means you can download apps, eBooks, and movies straight from Google if you prefer. Other apps include a media player, eBook reader, mSpot music app, and OoVoo and eBuddy chat apps as well as Zinio’s magazine app and Amazon’s Kindle eBook app.

Lenovo’s tablet is also certified for Netflix, making it the first Android tablet that will be able to support Netflix Watch Instantly streaming movies and TV shows.

Optional accessories include a keyboard dock and a padded neoprene sleeve.

The $499 model that goes on sale today features 32GB of storage. It’s expected to be available throughout the US starting in August and it will hit the rest of the world during the third quarter of 2011.