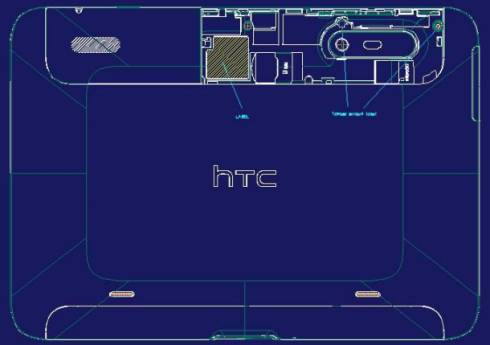 Word on the street is that HTC is working on a 10 inch Android tablet code-named Puccini. While the company hasn’t yet confirmed the existence of this device, something that sure looks like a 10 inch HTC tablet just popped up on the FCC web site.

There aren’t any photos posted and the only specs we can spot are related to the device’s wireless capabilities — but that makes sense, since that’s pretty much all the FCC really cares about.

But right now HTC only offers one tablet — the HTC Flyer which features a 7 inch display and a design that’s meant to be used in landscape ore portrait mode… but mostly portrait.

The FCC label location diagram for the new tablet shows a device that looks like it’s meant to be used in portrait mode. The folks at Engadget also did a little geometric guesswork and figured that based on the size of the SIM card slot in the diagram, this is probably a tablet with a 10 inch screen. You know, just like the rumored HTC Puccini tablet is supposed to have.

It looks like this model will be able to work with AT&T’s 3G and 4G LTE wireless networks. AT&T hasn’t actually launched its LTE network yet, but it’s scheduled to open to the public later this year.