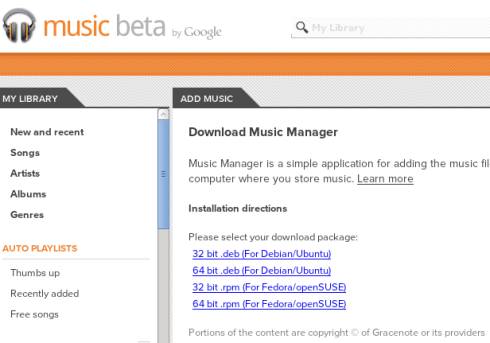 Google Music Beta allows you to upload your music to the cloud and stream it to an Android phone or tablet or nearly any computer with a web browser. While in beta, the service allows anyone to store as many as 20,000 songs online. But up until recently the only way to upload your music was to install an app for a Windows or Mac computer.

Now Google is offering a Music Manager for Linux as well.

In order to install the app, just visit music.google.com in a web browser on your Linux computer and select the “add music option.” You’ll be prompted to download the music manager, at which point you can find the installer file for your Linux distribution. It looks like there aer currently 32-bit and 64-bit installers for Debian, Ubuntu, Fedora, and openSUSE. While Google doesn’t offer a download link for ArchLinux, it looks like the app has been compiled for that platform as well.

Unlike the Windows and Mac versions, the Linux app lets users upload .ogg audio files — but they’re actually transcoded to MP3 files once they’re uploaded. Mac and Windows users have to convert OGG files before uploading them. The MAC and Windows software does already support AAC and FLAC formats as well as MP3 though, so I’m holding out hope that support for .ogg and other media formats will come to those platforms eventually as well.