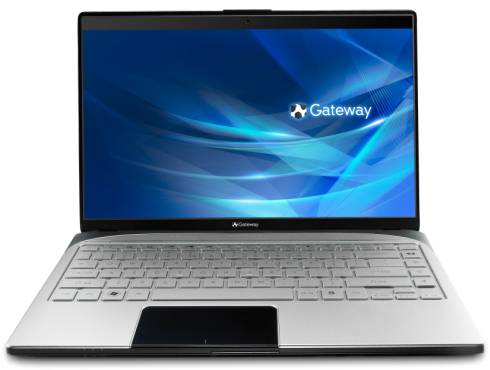 When the first 7 inch netbooks hit the market, one of the most frequent complaints I heard was that the bezel around the screen was just too big. Sure, an Asus Eee PC 701 has a 7 inch display, but the big black bars on the sides make the laptop a lot bigger than you might expect from a device with such a small screen.

These days it’s rare to see a notebook with a screen bezel that’s quite so large, but the black border around the screen is a constant presence on mobile computers, often leading people to wonder why PC makers can’t just make the bezels smaller and the screens larger to make better use of the limited space on portable laptops.

Gateway apparently has the answer: no reason at all. The company’s latest notebook packs a 14 inch widescreen display into a laptop case that’s normally used for 13.3 inch models. The Gateway ID47 Series measures 1297″ x 8.95″ x 1.13″ and has a starting price of $700.


While the laptop has a 14 inch screen, it has the same 1366 x 768 pixel resolution that we’ve come to expect from most portable notebooks. It’s also not exactly the lightest 13.3 inch/14 inch notebook. It weighs in at 4.6 pounds.

The folks at Laptop Magazine have some hands-on photos.