It looks like the folks behind the wildly unpopular JooJoo may be ready to take another crack at this whole tablet thing. There’s a listing for a new device at the FCC website for a product from Fusion Garage — the company that made the JooJoo tablet. There are few details available, but the FCC label ID drawing seems to suggest that this product will be the size and shape of a tablet computer. 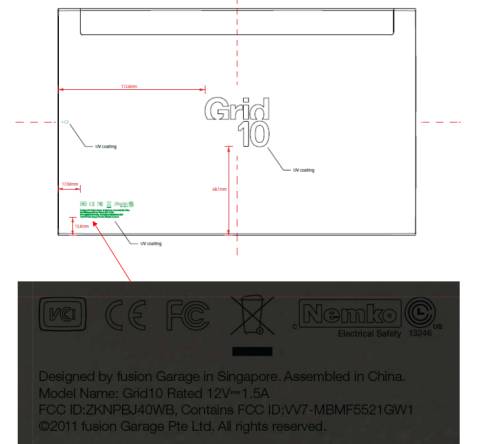 The original JooJoo was designed to be a 12 inch tablet for surfing the web. It had a barebones operating system that was designed to launch a web browser and not much else, and it was initially designed in partnership with TechCrunch’s Michael Arrington as the “Crunchpad.”

By the time it was released though, the JooJoo was an overpriced and underperforming tablet which was difficult to use and couldn’t match the user experience of Apple’s iPad or any number of Android tablets.

The company has indicated that while the original JooJoo tablet was discontinued last year, something new is on the way. This FCC label could be the first indication that JooJoo’s second attempt is coming soon.

Update: It’s official. Fusion Garage introduced a new tablet called the Grid 10 in August. It has a 10 inch, 1366 x 768 pixel display and a new operating system based on Android. The GridOS operating system can run Android apps, but the user interface has been customized and Fusion Garage will offer a number of custom apps for email, media playback, and search.