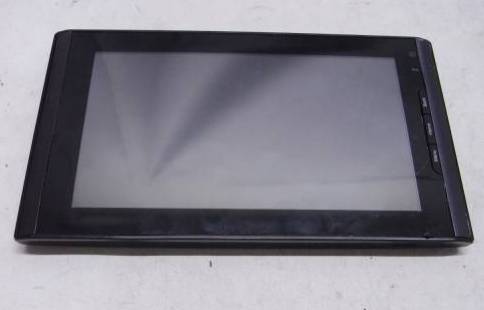 Apparently someone forgot to name this Android tablet, because it showed up at the FCC website this week with a user manual describing it simply as a Freescale IMX515 PC. Since Freescale is a chip designer that just happens to have a mobile processor called the i.MX515, I’m going to go out on a limb here and assume that’s not the final name for this tablet. It’s just a placeholder name.

Anyway, the tablet was submitted to the FCC by a Chinese company called Shaoxing Longxin Electronics. I have no idea if it will ever go on sale in the US.

It has a kind of boxy design, a 1.3MP front-facing camera, a mic, memory card slot, mini-USB port, and a few buttons on the front for navigating the Android operating system. This tablet is designed to run Google Android 2.x and not the new tablet-friendly Android 3.x Honeycomb which is designed for device without buttons.

In fact, there are a few other buttons missing from this tablet as well — it doesn’t have volume buttons on the case. Instead you have to tap the volume up and volume down icons that appear in the status bar. That means you can’t adjust the volume when the display is off or when you’re using a full-screen app which covers the status bar.

Aside from the processor, ports, and buttons, there aren’t any specs available for this tablet. My guess is that it has a 7 inch display, but I can’t say whether it uses a capacitive or resistive touch panel or what kind of display resolution it has.

Update: It looks like this could be the SkyPad Alpha — or another tablet based on the same design.