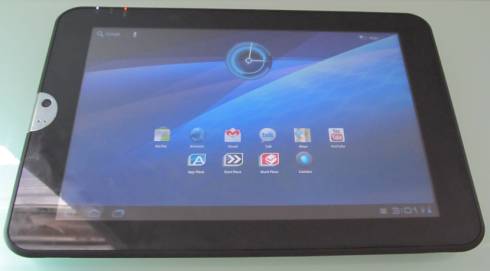 At a time when nearly every Android tablet on the market has the same basic specs, including a 10.1 inch, 1280 x 800 pixel display and 1 GHz NVIDIA Tegra 2 dual core processor, the Toshiba Thrive manages to stand out. That’s because this device takes a much more PC-like approach toward the tablet space than competing devices from Samsung, Acer, Asus, HTC, or Motorola.

Toshiba loaned Liliputing a demo unit to review, and we’ll have more details soon. But here are some initial impressions.

Like a personal computer, the Toshiba Thrive is easy to augment with peripherals, for instance. There’s a full-sized USB port and a full-sized SD card slot. So while you can purchase the tablet with 8GB, 16GB, or 32GB of built-in storage, you can add extra storage space just by plugging in a cheap USB flash drive or SD card.

You can’t install programs to an SD card in Google Android Honeycomb, so if you plan to install a lot of apps, you might want to avoid the 8GB model. But if you’re primarily looking for a way to add extra music, movies, documents, or other files to your device, it’s probably cheaper to buy an SD card than a tablet with additional storage. The 8GB model runs $430, while a 16GB version costs $480 and the top-of-the-line 32GB tablet costs $580.

The full-sized ports aren’t just for additional storage though. Toshiba also designed a File Manager application for Android which makes it easy to copy files to and from removable storage devices.

The Thrive tablet also has a full-sized HDMI port which allows you to watch videos, play games, or just mirror your tablet’s display on a high definition television or monitor. 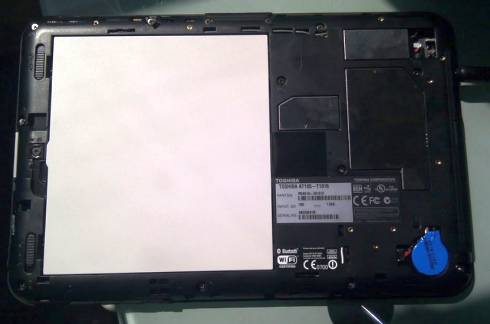 Another thing that sets the Toshiba Thrive apart is the removable rear panel. You can pry open the case using nothing more than your fingernails. This lets you easily replace the battery if you’re on an international flight and need more battery life or if your battery just doesn’t last a long as it once did and you want to swap it out for a new one.

As a side note: There’s a lock button on one side of the tablet which is supposed to prevent you from being able to remove the back panel. But it doesn’t really work all that well because it only connects to one corner of the lid. There’s nothing preventing you from prying most of the back cover free. You just can’t fully separate it from the rest of the tablet unless the lock switch is in the open position.

The tablet comes with a black rear panel with a soft plastic, textured finish. But you can also purchase violet, silver, green, or pink covers for $20 each if you want to give the tablet a more distinctive look.

Toshiba also loads the Thrive tablet with a couple of custom apps including its own app store, an eBook store, and a news reader. That’s not particularly unusual, as every tablet manufacturer seems to want to develop a revenue stream that goes beyond the initial sale of the tablet itself.

But the Thrive also comes with a few apps that might actually be useful including a media player with support for streaming media from UPnP capable devices on your home network, QuickOffice for editing office documents, and a 45 day free trial of LogMeIn, a remote desktop application that lets you control a PC or Mac from your tablet — effectively giving you a way not only to manage your files when you’re away from your PC, but also to sort of run desktop apps on your Android tablet (if you consider running an app on a remote computer and streaming the results to your mobile device to be a satisfying experience).

Toshiba’s Thrive tablet also features SRS audio with a number of optional multimedia enhancements such as ambient noise equalization, voice clarity enhancements, and volume boost. I’m looking forward to playing with these features more to see how they work.

I’ll have more details once I have time to do a full review of the Toshiba Thrive. But my initial impression is that Toshiba has taken some steps that really do make its tablet stand out from the crowd — and for the most part in a good way.

The Thrive isn’t the thinnest or lightest tablet available. It weighs 1.6 pounds, compared with the Samsung Galaxy Tab 10.1’s 1.25 pound weight. It’s also longer and thicker than the Samsung tablet (you can see a few comparison shots below). But while the Galaxy Tab is certainly the most stylish of the recent Android tablets to hit the market this summer, the Thrive might be one of the most functional.