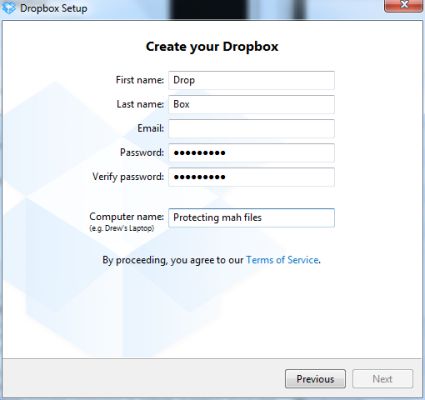 Dropbox is a popular cloud-based service that allows users to store files online where they can be accessed from multiple devices or even shared with friends or colleagues. It’s insanely useful if you’re looking for a way to transfer files between computers, access important documents from your PC on your phone, or share items with your contacts. But this weekend the company issued an update to its Terms of Service which has created a bit of an uproar and raised the question of who really owns your data once you upload it to the cloud.

First of all, what do we mean by “cloud?” In this case, we basically mean someone else’s servers. Once upon a time, the word “internet” encompassed a wide range of technologies for connecting computers together, including FTP, telnet, gopher, IRC, Usenet, and eventually the Web. Technically it still does, but most people think the Web is synonymous with “internet,” and so the word “cloud” has arisen to describe the concept of running apps or storing data online — because these new cloud-based services such as Dropbox aren’t just web sites or “web apps.” Maybe people are starting to understand again that the “internet” and the “web” aren’t the same thing.

Anyway, the cloud is still a sort of murky concept — because services like Dropbox feel for users like an extension of your desktop computer. For instance you can upload all of your music to Google Music or Amazon Cloud Drive and access them anywhere — but it still sort of feels like you’re just accessing data from your computer. And Dropbox does something similar for all sorts of files.

But the truth of the matter is that your data is all sitting on someone else’s servers. And that’s where things start to get complicated, because the only thing really determining who owns those files at that point is the Terms of Service that you agree to when you sign up for the service… and a lot of people never actually read the ToS.

Technically, a company can assert complete control over all the data you’ve uploaded in the ToS. Most companies that care about keeping their customers don’t do this… because few people would willingly upload their files if they knew it meant giving up any claim to copyright or privacy.

But sometimes it can look like a company is asserting its right to control and distribute your files in a way it sees fit. Photo-sharing service TwitPic discovered this recently when updating its terms to make it clear that the the company could re-distribute your pictures.

Many users cried foul, asserting that this meant TwitPic could sell your pictures or take other actions without users’ consent. But TwitPic clarified that it had simply wanted to make it clear in the ToS that users were granting the company the right to show pictures on the web and share them with third-party services such as TweetDeck or other Twitter clients.

Dropbox also offers tools that let other services, such as security app 1Password to integrate with the online storage service. The developers of 1Psasword have dissected the new Terms to show what they really mean — in a nutshell, that you’re granting Dropbox the right to put files you own online.

Honestly, this is the sort of thing you want to see in a company’s Terms of Service, because it makes it clear just what kind of licenses you are granting them.

This weekend Dropbox went through a nearly identical problem. The company updated its ToS, some users started complaining, and Dropbox tried to clarify.

In the grand scheme of things, it doesn’t seem like Dropbox or TwitPic were trying to take advantage of users or sell or share their data without first obtaining consent. Instead they tried to update their legal documents so that they more clearly reflected exactly what the services were already offering.

The problem is that many people aren’t used to reading that kind of clear explanation. If you look at the Terms for all sorts of online services you’ll find similar language explaining that you’re granting non-exclusive, royalty-free rights to distribute your photos, words, or other data.

But that doesn’t mean the whole outcry is much ado about nothing. It’s good to be reminded every now and again that even if a cloud service isn’t directly asserting ownership of the files you upload — you are giving up a certain level of control over those files when you decide to share them. That’s true whether you’re posting on a public site such as Flickr or a more private service such as Dropbox where your files can only be seen by the people you share them with.

If you want to make absolutely certain that nobody will ever sell your content, turn it over to the feds when subpoenaed, or otherwise breach your privacy, the best thing to do is probably to horde all of your data on a local hard drive. But you lose the benefits of a cloud-based service such as the ability to easily share files, publish them for the world to see, or protect your important data which might be lost if your local hard drive happens to fail.

17 replies on “Dropbox, cloud storage, and who owns your files?”