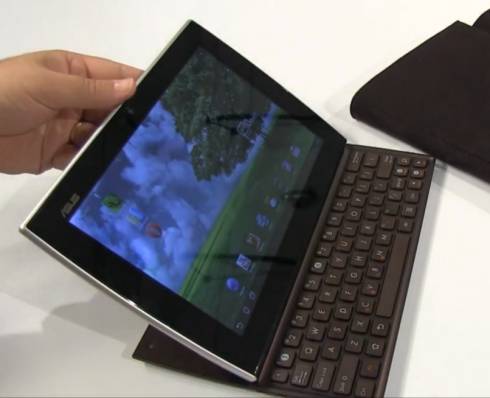 The Asus Eee Pad Slider is a 10 inch Android tablet with a slide-out keyboard tucked away behind the display. It’s expected to launch in the US this fall, and the tablet recently made an appearance at the FCC.

The last time I actually saw the tablet was way back in January when Asus showed off an early prototype running Google Android 2.x. But the folks at Notebook Italia spotted a new video on YouTube today showing an in-depth look at the latest version of the tablet, complete with Google Android 3.1 Honeycomb.

While the video is in Romanian, it gives a good look at the device, an optional case, and the slide-out keyboard mechanism.

The keyboard looks reasonably large and comfortable to type on — but it lacks a touchpad, which means that you’ll need to reach up and touch the capacitive touchscreen display to launch most applications, tap on links in web pages, or perform many other actions.

You can also find some special function keys on the keyboard including home, back, and menu buttons so that you dont’ need to touch the screen for everything.

Overall the Slider looks like an interesting alternative to the average keyboard-free Android tablet, or even the Asus Eee Pad Transformer which is available with an optional keyboard dock accessory, but doesn’t ship standard with a keyboard.

Unfortunately the Slider has a glossy display and the sliding mechanism locks the tablet and keyboard at a fixed angle. You can’t tilt it forward or back a few degrees to a more comfortable angle — and if you’re sitting by a sunlit window you’ll probably just have to move because there aren’t a lot of options for adjusting the screen angle to prevent glare.