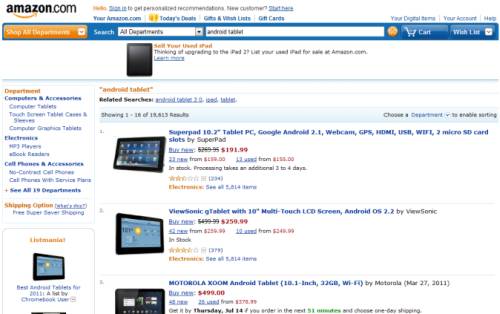 Online retailer, digital media distributor, and California sales tax-evader Amazon has yet to confirm that its working on an Android tablet. But everybody pretty much knows that’s exactly what the company is doing — and it makes a lot of sense. Just like the Amazon Kindle has helped turn Amazon into a digital book selling powerhouse, an Android tablet could make the company an awful lot of money in Android app sales from the Amazon Appstore.

Now the Wall Street Journal is reporting that Amazon’s tablet could launch by October. The report also suggests that there will be two new versions of the Amazon Kindle eBook Reader in the third quarter, one with a touchscreen and one without.

The Android tablet will reportedly have a 9 inch display and it will be produced by an “Asian manufacturer,” which is true of almost every other tablet on the market today. Interestingly, the tablet won’t have a camera, which will set it apart from most competing Android tablets. But it sounds like Amazon hopes to emphasize media consumption.

In addition to the Amazon Appstore and Amazon Kindle eBook Store, Amazon also sells MP3 music and digital videos which can be purchased, rented, streamed, or downloaded.

Earlier we’d heard that the tablet could launch in August, but now it looks like that date was either fictional or that it’s been pushed back. We’d also heard that the device could include streaming TV and movie content, and that it could have a quad-core chip and a display that functions in color and black and white modes. The Wall Street Journal hasn’t confirmed any of those rumors.

3 replies on “Amazon tablet could launch before October”