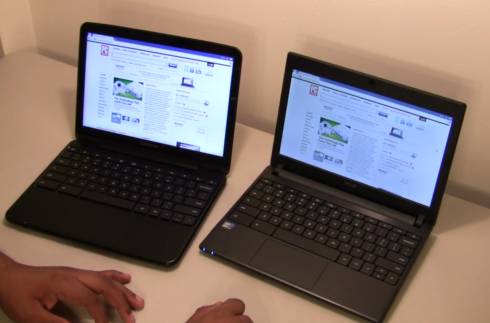 The Acer AC700 Chromebook began shipping this week and Quincy from Chromebook User is one of the first people to get his hands on the Chrome OS laptop. He also happens to have the only other Chromebook on the market, a Samsung Series 5, and he was kind enough to post a video comparing the two laptops.

On paper, the Acer and Samsung notebooks have a lot in common. They both have 1.66 GHz Intel Atom N570 dual core processors, 16GB of solid state storage, and oversized touchpads below the keyboard. The Samsung model has a 12.1 inch screen while the Acer notebook has an 11.6 inch display. But Quincy found a couple of areas where the Acer laptop sets itself apart from the Samsung model.

First, there’s a removable base panel on the Acer AC700. That means you can remove or replace the RAM. The battery is also user replaceable. Samsung’s Series5 has a non-removable battery and memory.

Acer is also charging less for its laptop. The AC700 has a starting price of $349 for a WiFi-only model. While Samsung’s Chromebook has a matte display, the Acer model has a glossy display which reflects quite a bit of glare in brightly lit settings.

Both laptops are designed to run Google Chrome OS, an operating system designed around a web browser. It boots quickly, runs web apps, and stores most of your important data online.

You can check out the comparison video below, as well as a second video showing what it looks like when you remove the base plate to access the memory.