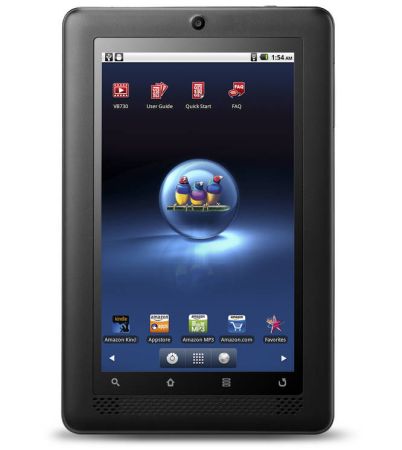 MSI isn’t the only company getting into the budget Android tablet space. ViewSonic just announced that it will offer a new 7 inch tablet called the ViewBook 730 for $249.99.

The tablet has an 800 x 480 pixel resistive touchscreen display and a stylus for writing and drawing. It also has a 1 GHz ARM Cortex-A8 processor, and 8GB of storage. ViewSonic is promising up to 8 hours of run time.

The ViewBook 730 runs Google Android 2.2, and while I don’t believe you’ll be able to access the Android Market (at least not without hacking the tablet), it will ship with the Amazon Appstore preloaded. ViewSonic will also include Amazon’s Kindle, MP3, and shopping apps as well as Twitter, Mediafly, and YouTube apps. The ViewSonic ViewBook 730 will support Adobe Flash Player 10.1.

The tablet will be available later this month for $249.99. That makes the ViewBook 730 a little pricier than the upcoming $200 MSI WindPad Enjoy 7 or the $99 Arnova 7 tablet. But at a time when many Android tablets run $400 or more, it’s nice to see a few companies competing for space at the bottom.