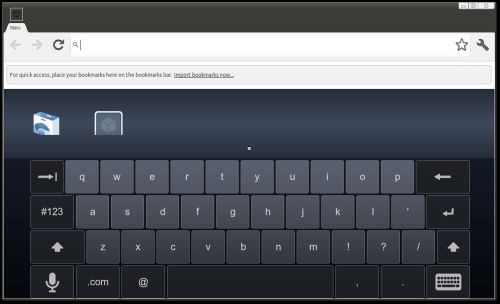 Google insists that Chrome OS is designed for laptop and desktop computers with a keyboard and touchpad. But behind the scenes there’s work underway to build a touchscreen-friendly version of the browser-based operating system. We’ve seen evidence pop up a few times recently. Now web developer François Beaufort has compiled a version of Chromium with the Touch UI installed. Chromium is the open source project behind Chrome OS.

The operating system is pretty recognizable as a variation of Google Chrome OS. There’s a tabbed web browser with big icons for web apps and a link to the Chrome Web Store. But there are two key differences:

Honestly, the oversized icons and other graphic elements look too big at this point. They take up too much screen real estate that should be devoted to the web browser. The keyboard actually looks pretty nice, but for some reason it doesn’t stretch from edge to edge and it also takes up a lot of space.

The Touch UI for Chromium is still a work in progress and it may never actually make it to the official builds of Chrome OS. But for now you can find a few more pictures at Beaufort’s Buzz page.