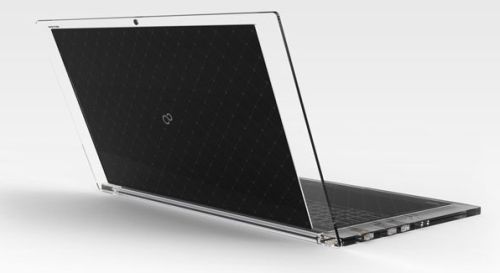 There are plenty of devices on the market which let you charge your laptop, phone, or tablet using a solar panel. But have you ever wondered what a laptop with solar panels built into the case would look like? As part of a contest sponsored by Fujitsu, a designer named Andrea Ponti came up with the Luce laptop concept showing a notebook with solar panels designed so that they’re nearly always facing the sun — as long as you’re outside or near a window.

That’s because there’s a panel on the lid for when the laptop is closed, and another built into the keyboard area for when you’re actively using the Luce.

The concept notebook isn’t exactly ultraportable by today’s standards, but it’s not all that bulky, measuring about 16.1″ x 9″ x 0.5″ and weighing 4 pounds.

The parts of the laptop that aren’t housing the solar panels would include an OLED display and a clear polycarbanate case. The clear keyboard would rest on top of a solar panel, allowing the battery to charge while you use the device.

I kind of doubt that this particular laptop will ever be built. But the design does show what a solar-powered laptop of the future might look like.