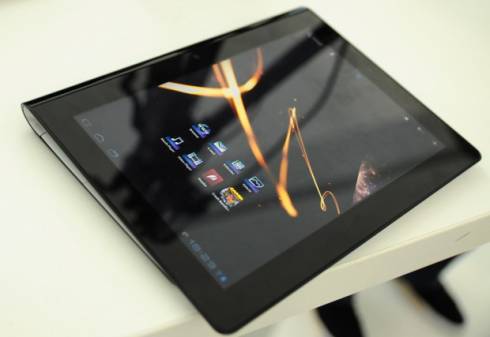 Sony has started showing off the the upcoming Sony S1 and S2 tablets. Up until now all we’ve seen are a few promotional videos of the company’s new 9.4 inch S1 tablet and dual-screen Android device. But the folks at Golem got to spend some time with both devices at an event in Germany.

The dual screen S2 is definitely one of the most intriguing Android devices I’ve seen in a while. It folds up into a small, pocket-sized device. But when unfolded, the two 5.5 inch, 1024 x 480 displays look nice and sharp and the gap between the two screens is pretty small. You can check out a very brief video after the break.

Golem reports that the S1 tablet is comfortable to hold and weighs just about 1.3 pounds. It’s designed to be able to run Playstation games using on-screen controls.

Sony hasn’t announced any launch dates for these two devices yet, but the Sony S2 recently showed up at the FCC web site which is a pretty good indication that it’s on its way to the US soon.