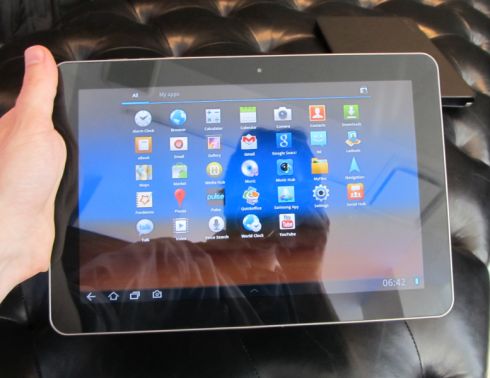 When the Samsung Galaxy Tab ships in the US starting next week there will be somethkng missing: the tablet-friendly version of the company’s Touchwiz software for Android. In order to ship the tablet with Google Android 3.1 as soon as possible the company decided to offer Touchwiz at a later date as a downloadable option.

The software update will add a custom application switcher which you can bring up from any screen by swiping a finger up from the bottom of the screen. It will also include Samsung’s Media Hub and Reader’s Hub software. The company also plans to offer a version of the Swype keyboard for tablets soon.

That means if you pick up one of the first tabletss in New York on June 8th or around the country the following week it will come with Google’s standard software. The only customization is am optional Samsung software keyboard with larger keys and a brighter color scheme. At some point after that you’ll be prompted to download an update which will ads Touchwiz. You’re free to reject the update if you’d prefer to keep using the standard Google software, but your tablet will probably keep nagging you until you update and a Samsung official I spoke with today seems convinced that most people will prefer the Touchwiz experience. It still seems like a risky move to me.

I got a chance to play with a Tab 10.1 this evening and I’ll share some photos and video soon, but I’m posting this from my phone so you’ll just have to take my word for this: it is by far the thinnest and lightest 10 inch tablet around and that makes it much easier o hold in one hand than the Motorola XOOM or Asus Eee Pad Transformer. More details are coming soon.

3 replies on “Samsung to offer Touchwiz as over the air update for the Galaxy Tab 10.1”