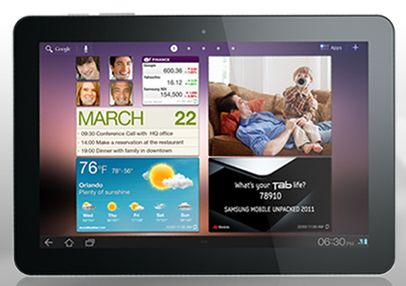 Samsung has confirmed that the Samsung Galaxy Tab 10.1 will go on sale in the US on June 8th with a starting price of $499 for the 16GB model. But there’s a little catch: You’ll need to visit the Best Buy store at Union Square in New York to pick up the tablet next week. The rest of the country will have to wait until June 17th.

The good news is that Samsung has tweaked the tablet so that it will ship with Google Android 3.1. When the company first announced the Galaxy Tab 10.1 the plan was to offer it with Android 3.0, but after Google released its software update, it looks like Samsung scrambled to ensure that the Tab would have the latest software.

Samsung is also loading up the tablet with its TouchWiz software interface and custom media software for movies and eBooks.

The Samsung Galaxy Tab will also come in a 32GB version which will cost $599.

I’ll be in New York tonight for a reader meetup with reps from Samsung and the guys from Android Central and Phandroid and I’ll have a chance to check out the Galaxy Tab 10.1 in person. I’ll be sure to post more details about the tablet once I’ve had a chance to play with it.