Intel’s Classmate PC platform may have started out as the company’s answer to the OLPC Laptop, but over the past few years about twice as many Classmate PC models have been deployed in classrooms around the globe as OLPC XO Laptops. As of this week, Intel says more than 4 million of the small rugged netbooks with child-friendly software have shipped. The latest estimates I’ve seen for the XO Laptop suggest there are about 1.8 million in the wild.

The chip maker doesn’t actually build the Classmate PC, but instead provides a reference design which is used by equipment manufacturers around the world. That’s why you can see netbooks in a number of different countries that look nearly identical, but which have actually been built by different device makers.

There are actually a couple of different Classmate models, including a convertible tablet-style device with a touchscreen display which was introduced last year and a more traditional clamshell-style netbook. The laptops are all designed for use in kindergarten through 8th grade classrooms and they’re typically deployed with the assistance of governments and/or schools. A few companies do sell Classmate PC models directly to consumers though. I reviewed a CTL 2Go Classmate PC NL2 last year which is based on the latest convertible tablet design. 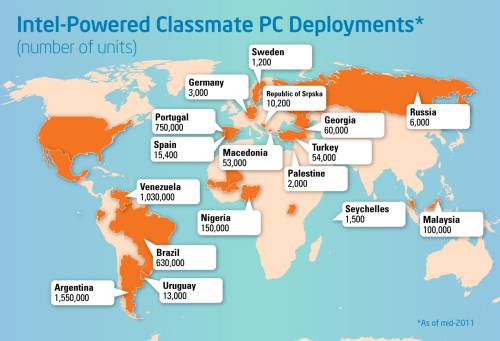 Of the 4 million classmates that have shipped, it looks like most are traditional clamshell netbooks. The Argentinian government is the biggest customer so far, having deployed more than 1.5 million Clamshell netbooks running Windows XP, Windows 7, and Pixart Linux. Venezuela, Portugal and Brazil are also major customers with 1 million, 750,000 and 630,000 clamshell models respctively.

The convertible tablets, which are more expensive, have been deployed in smaller numbers in Germany, Nigeria, Spain, and Sweden, among other countries.

The Classmate PC concept is more expensive than the XO Laptop and the machines don’t feature sunlight readable displays or dust-resistant membrane-style keyboards. But they do run Windows or mainstream Linux distributions such as Ubuntu rather than the Sugar OS educational Linux software designed for the XO.