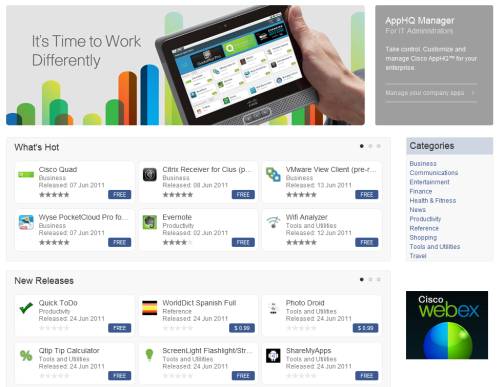 The Cisco Cius tablet is an enterprise tablet which runs Google Android as well as Cisco software for web conferencing, chatting, and making video calls. The tablet is aimed at customers looking for mobile devices which can be used with your work network. The company says early customers include CDW, Verizon, and Nottingham University Hospitals.

Now Cisco is also launching an app store for the tablet. Unlike most Android app marketplaces, the Cisco AppHQ is meant to be used both by end users and IT managers. IT administrators can set up a hosted version of the store allowing access to only specific apps. If you don’t want your employees downloading Angry Birds, you just block it.

Cisco also tests each app before adding it to the AppHQ system, unlike Android. So there’s little chance of encountering an app that doesn’t work properly on your tablet. IT managers will also be able to install untested apps from the Android Market — but while people who buy a tablet for personal use might be tempted to get the device with the most available third party apps, I can certainly see enterprise customers sticking with the Cisco-approved apps.

The Cius tablet is expected to roll out globally on July 31st for $750 or less.