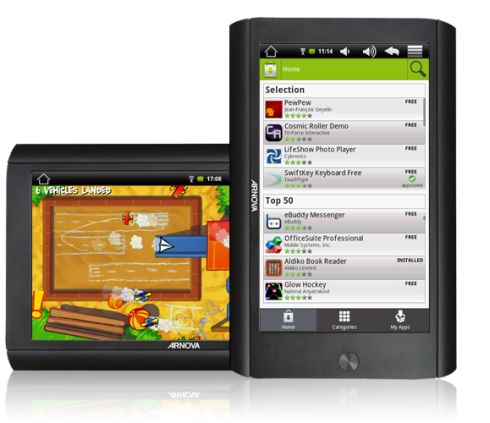 Archos is expected to launch a new line of tablets at an event on June 23rd, but the company’s budget line of Arnova tablets already received an update a few days ago when Archos introduced the Arnova 7 and Arnova 84. There’s one key difference between these tablets and the big name devices coming from companies such as Samsung, Toshiba, and HTC: The Arnova products are dirt cheap.

Archos created official product pages for the new tablets this weekend, and the tag-line for the Arnova 7 is that “a 7 inch tablet for $99 is possible.”

The tablet isn’t a powerhouse by any means. But it doesn’t look all that bad on paper. For $99 you’ll get a 7 inch, 800 x 480 pixel resistive touchscreen display, Googl Android 2.2, and 4GB of flash storage. The tablet can handle H.264 videos with resolutions up to 720p as well as MPEG-4 and RealVideo formats.

The product page doesn’t mention the CPU, but it’s probably safe to say that the Arnova 7 doesn’t have a bleeding edge dual core chip. But if you’re just looking for a cheap tablet for surfing the web, reading eBooks, watching videos, or playing a few games it might be good enough.

Android apps generally aren’t designed for resistive touchscreens, since they work best with fingertip input rather than fingernail or stylus input. But Archos tends to use decent resistive touch panels which offer a passable, if not stellar user experience, so I’ll reserve final judgement on the Arnova 7 until I have a chance to check it out in person.