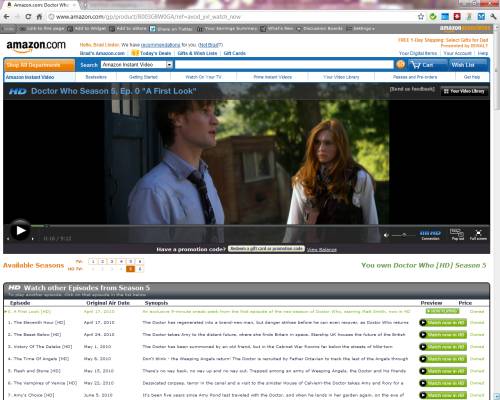 There’s a rumor floating around that Amazon could be preparing a line of Android powered tablets. The move would make a lot of sense for the company. Currently Amazon’s only consumer electronics offering is the Kindle, which allows customers to purchase and read Kindle eBooks. General purpose Android tablets would help the retailer push the Amazon Appstore as well as the Amazon MP3 and Amazon Instant Video services.

Amazon has yet to confirm the existence of any tablet, but the folks at research firm Detwiler Fenton are reporting that an Amazon tablet code-named “Hollywood” will have a 10 inch color display and launch by the holiday season. Amazon is also reportedly going to offer its movie streaming service for free at launch, although Detwiler Fenton says the free service will only be available “for an unspecified amount of time.”

The Amazon MP3 digital music store ships standard with a number of Android smartphones and tablets, but the company has yet to offer a version of its video download and streaming marketplace for Android devices.  More than a year ago a leaked product sheet for the Dell Streak suggested Amazon Video would be available on the 5 inch tablet, but that never materialized.

This would make the Hollywood tablet the first to ship with access to Amazon’s video service. The fact that users would be able to stream content for free would be an added bonus.

Netflix currently offers an app for Android phones which allows subscribers that pay $7.99 per month or more to stream some TV shows and movies. The app doesn’t currently support any Android tablets that I’m aware of though.

Right now the Hollywood tablet still rests in the realm of rumor and speculation. In fact, Detwiler Fenton refers to it as a new Kindle with a color screen, which would indicate that the device might be more eReader than tablet.

via Business Insider and Barron’s