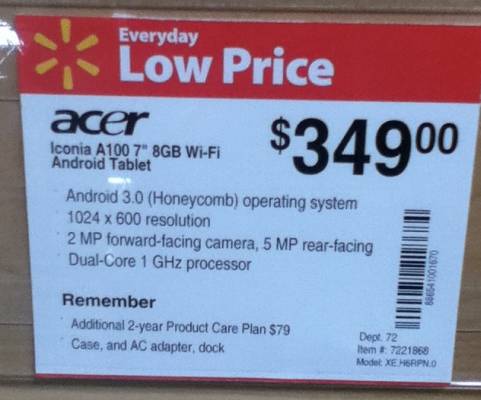 It looks like the Acer’s 7 inch Android tablet could be coming soon to a Walmart near you. This weekend a Twitter user named Jared Giles spotted a product card and price tag for the Acer Iconia Tab A100 at a Walmart location.

The tablet doesn’t appear to actually be in stock yet. But if the product card is anything to go by, we can expect the Iconia Tab A100 to sell for $349 when it does hit store shelves.

Acer already offers a 10 inch tablet called the Iconia Tab A500. Its little sibling has similar specs, but a smaller, lower resolution display. The little guy will have a 1024 x 600 pixel display, a 2MP front camera and a 5MP rear camera. It will be powered by a 1 GHz NVIDIA Tegra dual core processor and have 8GB of storage.

Of course, the Android 3.0 operating system listed on the Walmart tag is starting to look a bit dated now that we’re hearing that Google will be pushing out Android 3.2 for tablets with 7 inch displays soon.

via Engadget and Android Community