Research in Motion is expected to launch a software developer kit (SDK) allowing developers to write native apps for the BlackBerry PlayBook this summer. This will let developers code apps specifically for the QNX operating system that runs on the tablet. But one independent developer has already figured out how to write QNX apps and transfer them to the tablet without an official SDK. 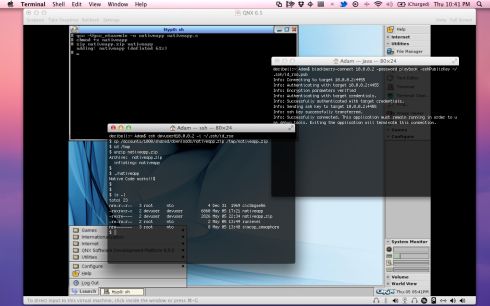 The trick is to use the development platform for the QNX desktop environment and then compile the apps to run on ARM-based chips and move them to the tablet.

There are a few hoops to jump through along the way, but developer Adam Bell provides instructions for each step.

What this means is that developer who plan to use the native SDK once it’s available can start working on apps even before the SDK launches. Right now the only way to write apps that will run on the PlayBook is to use the Adobe AIR platform — although soon Google Android apps will be able to run on the tablet as well.

2 replies on “Who needs an official SDK? Native QNX apps can already run on the BlackBerry PlayBook”