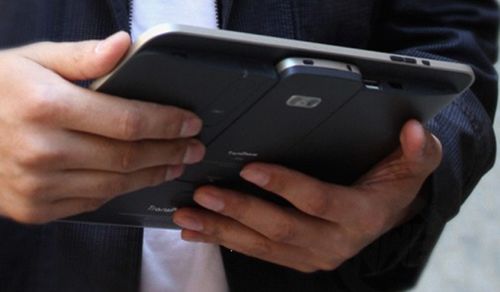 The Asus PadFone is either one of the best tablet ideas to come along in a while, allowing users to use a mobile device as a phone or a tablet while paying just one monthly fee for data, or it may just another way for wireless carriers to charge customers silly tethering fees. Only time will tell. Either way, it looks like Asus isn’t the only company to come up with the idea.

We already saw that ECS is working on a PadFone-like tablet shell that would work with a wide range of different smartphones including the iPhone. A site called Nowhere Else also spotted a prototype of a CMIT TransPhone which appears to take a more Asus-like approach with a tablet and phone that are made for one another.

While the Asus design includes a compartment on the back of the tablet with a cover that closes over the phone, the TransPhone has a space in the tablet that you simply slide the phone into. The phone is powered by a 1.2 GHz Qualcomm dual-core processor and support HDMI output. It’s not entirely clear if the phone powers the entire tablet experience or if the tablet can work as a standalone device without the phone.