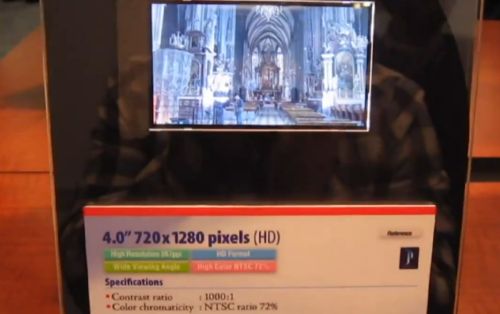 It looks like mobile device makers are determined to make that 32 inch HDTV in your living room look like old technology. You thought you were pretty cool for getting a TV that could display 1280 x 720 pixels for high definition video playback… but Toshiba wants to pack the same number of pixels into a 4 inch smartphone display.

The company is promising to show off Low Temperature Poly-Silicon (LTPS) displays this week for 3.3 to 4 inch smartphones. The screens will have resolutions from 480 x 864 pixels to 720 x 1280 pixels and will have high contrast ratios, wide viewing angles, and good color reproduction. Oh yeah, they’ll also pack up to 367 pixels per inch, which makes the screens even more pixel-dense than Apple’s “Retina” iPhone displays.

Of course, the reason Apple calls it’s iPhone 4 display a Retina display is because the human eye can’t really spot any pixels on the screen when you pack them so tightly. So odds are you won’t notice a huge quality difference. But Toshiba’s screens could show every single pixel in a 720p HD video on a smartphone display, and that’s something you can’t do with Apple’s 960 x 640 pixel screens.

Toshiba is also expected to show glasses free 3D displays ranging in size from 3 to 21 inches, new capacitive touch panels, and other goodies at the SID Display Week 2011 event.

Toshiba and Apple aren’t the only companies working to make your HDTV look low-res. Samsung is also expected to show off a 10 inch, 2560 x 1600 pixel display at SID Display Week.

Update: Engadget scored some time with the new screen and posted the video to prove it. You can check it out after the break. The viewing angles look pretty good, and it’s kind of hard to gauge screen quality in a video shot with a point-and-click camera, but it certainly looks promising.

One reply on “Toshiba promises 720p displays for smartphones”