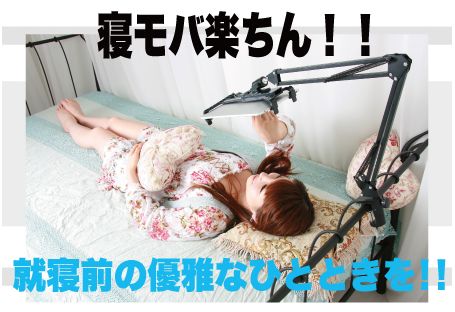 Sure, there’s no wrong way to hold an iPad, since it has wide viewing angles and the screen rotates automatically when you shift the tablet from landscape to portrait mode. But if you don’t like holding the 1.33 pound tablet in your arms while you’re in bed, there’s an awkward piece of hardware for that.

Japanese company Thanko has produced an iPad Flexible Arm, which basically looks like an adjustable lamp arm… except that at the end you get an iPad holder which hangs on tightly enough to let you float an iPad over your head while you’re lying down in bed.

I suppose this could come in handy if you want to watch a movie or read a book in bed without propping yourself up on a nice big fluffy pillow. But seriously, how lazy are you?

I mean, I suppose there are a handful of situations where something like this could come in handy. If you’re in a full body cast, for instance. I can’t imagine why anyone else would pay $61 for this thing though.

While the flexible arm is designed for the iPad, it should work with most tablets.

5 replies on “Tired of holding your iPad in bed? Thanko has a solution”