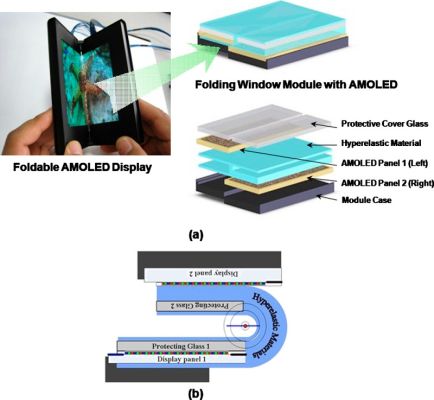 We’ve seen a number of designs for real or concept notebooks, tablets, and smartphones over the last few years with screens that are meant to be folded up. This allows you to have a big screen when you need the extra real estate, or a smaller partial screen when you don’t. The only problem is that it’s hard to make these gadgets look good when you have a big fat bezel separating one section of the screen from the next.

Now Samsung is working on a new type of AMOLED display which can be folded in half, but which doesn’t show a seam when fully extended.

After folding and unfolding a prototype 100,000 times, researches found that screen brightness dropped by just 6 percent, which is hardly noticeable. It’s also not all that likely that you’d ever get around to folding a device with this display nearly that many times.

It could be a while before we start to see real world products with this technology. Samsung has a habit of showing off futuristic concepts long before they’re ready for mass production. After all, this is the same company that’s been showing off semi-transparent displays and bendable displays for the past few years.