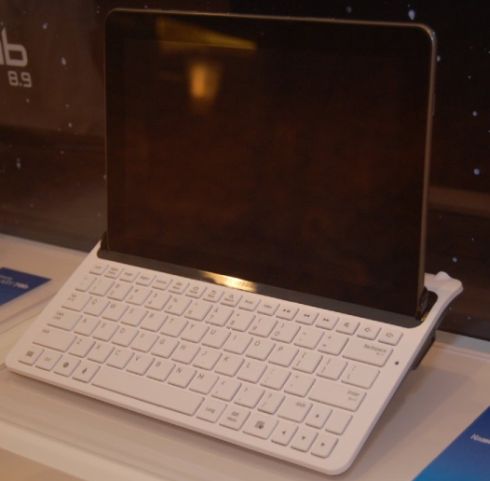 Samsung is preparing to launch the Samsung Galaxy Tab 10.1 next month, but the company also has an 8.9 inch model in the pipeline. While we haven’t heard much from Samsung about the smaller tablet since it was unveiled in March, Russian site mforum.ru spotted the tablet at an event this week — and also spotted an intriguing keyboard docking station for the tablet.

The Samsung Galaxy Tab 8.9 will have a 1280 x 800 pixel display, a 1 GHz NVIDIA Tegra 2 processor, and Android 3.x Honeycomb. It also runs Samsung’s custom TouchWiz software on top of Android.

The keyboard dock transforms the tablet into something like an Android netbook. It doesn’t appear to double as a screen cover the way the Asus Eee Pad Transformer keyboard does, but the keyboard looks like it’s well designed with decent spacing between the keys and a series of custom function keys for Android-specific actions such as Home, Back, Search, or voice input.

There’s no word on whether the keyboard will be available in the US or how much it will cost.

One reply on “Samsung Galaxy Tab 8.9 with a keyboard dock shows up in Russia”