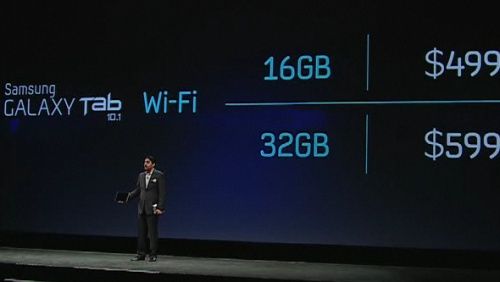 Update: Well it was nice while it lasted. J&R has removed the product pages for all four products. Now the links below simply redirect you to J&R’s tablet page.

The Samsung Galaxy Tab 10.1 isn’t expected to go on sale until next month, but J&R is already taking pre-orders for the tablet. The tablet features a 10.1 inch, 1280 x 800 pixel display, 1 GHz NVIDIA Tegra processor, and Google Android Honeycomb operating system. As expected, a model with 16GB of storage

J&R is also taking pre-orders for the Samsung Galasy S WiFi 4 and 5 inch media devices. These guys are Samsung’s answer to the iPod touch, offering many of the features of an Android smartphone without the 3G or cellular phone capabilities (or the long term service contracts.

The Samsung Galaxy S WiFi 5 has a larger 5 inch display with the same 800 x 480 pixel resolution. Most of the other specs are the same, but this model has a higher capacity 2500mAh battery.
via Netbook News and… Netbook News