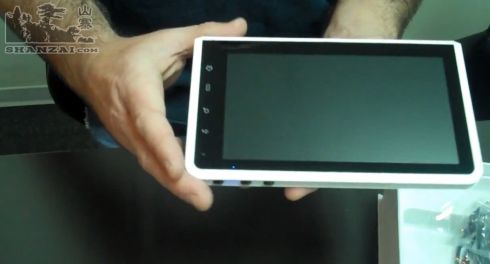 Cheap Android tablets from China are a dime a dozen these days, but one that stands out a bit is a new 7 inch model called the Rena3 which you can pick up from merimobiles for $215.

The tablet has a capacitive touchscreen display and a dual core Renesas ARM Cortex-A9 processor. While merimobiles describes the CPU as a 1 GHz processor, it actually appears to have a 533 MHz core and a second 666 MHz core, which I guess is supported to offer performance on par with a 1 Ghz processor — and in demo videos the tablet does appear to be quite speedy.

There are a few marks against the tablet. First, it has a relatively low resolution 800 x 480 pixel display. Second, the tablet runs Android 2.2 which is starting to look a bit dated. And third, it packs just 4GB of flash memory, although there’s a microSD card slot for additional storage.

For a few bucks more you can get a Barnes & Noble NOOK Color with a higher resolution display and which has the backing of a company you’ve actually heard of which means it’s more likely to get regular software updates. But the Rena3 is still a very interesting tablet for the price — especially for users interested in hacking the tablet with custom software. Unlike many cheap Chinese tablets, the Rena3 has Bluetooth and 802.11n support.

You can check out a of demo video after the break courtesy of Shanzai.com.